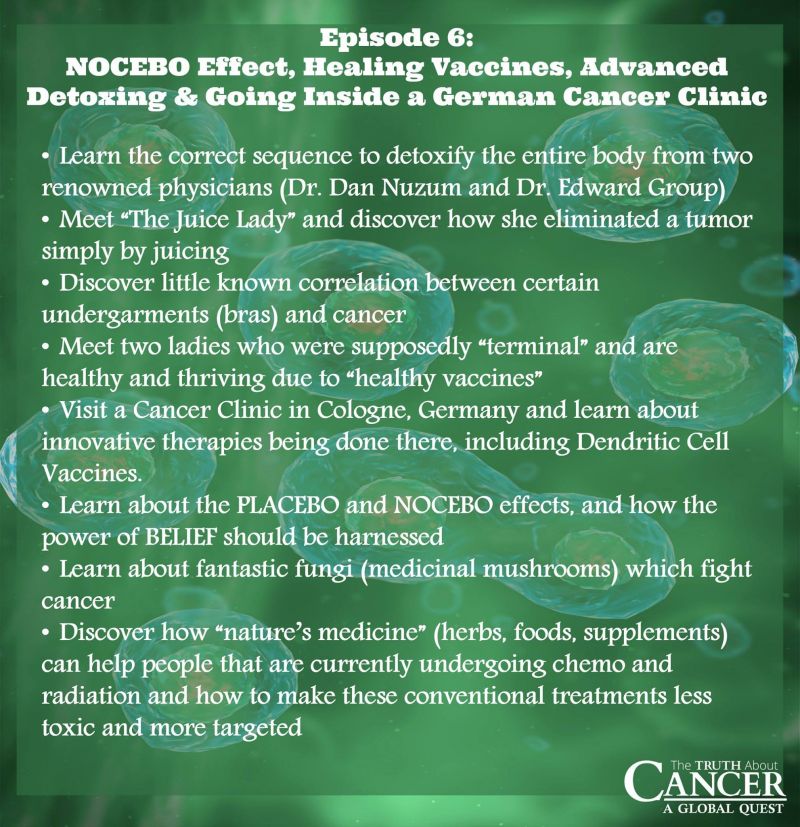 The Truth About Cancer: A Global Quest, Recap Episode 6

Dr. Group, Dr. Nuzum, and Dr. Buttar all really drove home this idea that without a thorough cleansing, the body cannot truly heal. I couldn’t agree more. It was mentioned that the intercellular matrix, the solution between the cells of the body, is vitally important to keep clean. Ideally, cells will excrete toxins into this matrix, and these are carried out through the lymph system, which is basically the drainage system of our bodies. If this matrix or the lymph system itself gets too clogged up however, a plethora of bad things happen but primarily oxygen and nutrients cannot be delivered to the cells which can be both the genesis of cancer and what prevents cancer from healing, alongside the obvious fact that those toxins are staying inside the body doing damage instead of being passed along.

Dr. Group went as far as to say that disease cannot exist inside a clean body. Sometimes concepts like these are hard to grasp when thinking about how they apply to my child who was born with cancer. He didn’t live some amount of a lifetime accumulating enough toxins to develop a disease, he was born with it! When you think about it though, babies today are born with insane amounts of these toxins already in their bloodstream due to the world their mothers live in and especially what most of them have been talked into consuming on a daily basis. So if babies in the womb are not only indeed exposed to these toxins just like the rest of us, but exposed to them from the moment of their conception through their initial development into a fully formed human, it’s actually a miracle that the majority are still coming out without a major disease.

Dr. Buttar has broken the term “toxicity” into a list of seven toxicities he went over in last night’s episode that I think is worth listing out. This should serve as a checklist for both what to avoid and what to address that is already inside of you and your children:
Heavy metals (Arsenic, cadmium, lead, mercury, etc)

For the physical toxins within the body, Ty and his guests went over detoxing the various systems of the body in the correct order, basically cleaning out all the exits, starting with the last exit to make a good pathway for cleaning out the next to last, etc.

The majority of the focus on methods of detoxing, especially when talking about cleaning out specific organs and systems, was spent on herbal formulas. I’ve known about Dr. Group for a long time and think he makes fantastic herbal products. On that note, I’ve been meaning to get his liver cleanse kit for quite a while now and seeing the episode last night pushed me over the edge. I’ll let you know how it goes! Another couple companies we have used in the past for herbal products and have heard great things about are Dr Schulze’s Original Clinical Herbal Formulae and Dr. Morse’s Herbal Health Club.

Dr. Wolfe also made a very good point that while these full blown heavy detox’s are great and very necessary from time to time, an emphasis must be put on gentle, whole body daily detox as well to keep the toxins from building up so much in the first place. He makes a tea for this purpose. Ryder also sits in the infrared sauna for this purpose (and others) every day along with detox baths multiple times per week.

In the last series, The Quest for the Cures Continues, Dr. Buttar and others brought up what I thought was an incredible point on the placebo effect (patients having positive results just from believing something is going to cure them, even if that something is just a sugar pill that they think is medicine!). Mainstream doctors will usually talk about the placebo effect like it’s a bad thing, but when you think about it, if you can cure someone of a disease just by getting them to believe they’re going to be cured from it without actually giving them anything at all you should be winning a Nobel Prize! This effect is very real, very well documented (that’s why drug studies have to go to such great lengths to control for it), and therefore something we need to always take into account. If your child is old enough, they will understand that something is wrong, yes, but you need to be doing everything you can to help them KNOW that they’re going to get better…And know it yourself!

This can be a double edged sword however. The opposite of the placebo effect, is the nocebo effect. When doctors deliver a terminal cancer diagnosis along with a timeline of how long they say that patient has left until they die, really it’s criminal what they’re doing. Study after study shows that when people believe they’re going to die, they do. My great grandpa died a couple months after my great grandma died because he didn’t WANT to be alive anymore without her. We’ve all heard stories like that. Sayer Ji points out that giving these artificial timelines based on outdated statistics of outdated therapies (chemo, radiation, and surgery) is ludicrous and patients and caregivers need to do everything they can to shield themselves from letting these thoughts implant themselves in their minds.

The concept of cancer vaccines, specifically dendritic cell therapy, is something I don’t know a whole lot about yet but it’s way up there on my list of things to learn more about. Dendritic cells are actually a part of the immune system that play more of a “helper” role in alerting various killer cells to bad guys in the body that they themselves had missed. This “vaccine” isn’t really a vaccine in the traditional sense of preventing a disease from happening in the first place, but instead taking out a patient’s own white blood cells, modifying them to recognize the particular cancer at hand, and reintroducing them into the body to put a nice big target on each cancer cell for the patient’s own killer cells. There is clearly a big benefit in the fact that these are the patient’s own cells being used so as not to risk any sort of rejection by the body.

This was one of the primary therapies used in Dr. Robert Gorter’s clinic in Cologne, Germany that Ty visited. Just like I noted in the episode 4 recap when Ty visited Dr. Jimenez’s clinic in Tijuana, Mexico, the idea that we’re being offered the latest and greatest in cancer healing technology in mainstream hospitals here in good ol’ US of A is a joke. In addition to the cancer vaccines, Dr. Gorter listed off total body hyperthermia, local hyperthermia, ozone therapy, mistletoe injections, and medical cannabis. And he was wearing what appeared to be a tuxedo which is awesome!!

That’s all for today, can’t wait for episode 7!