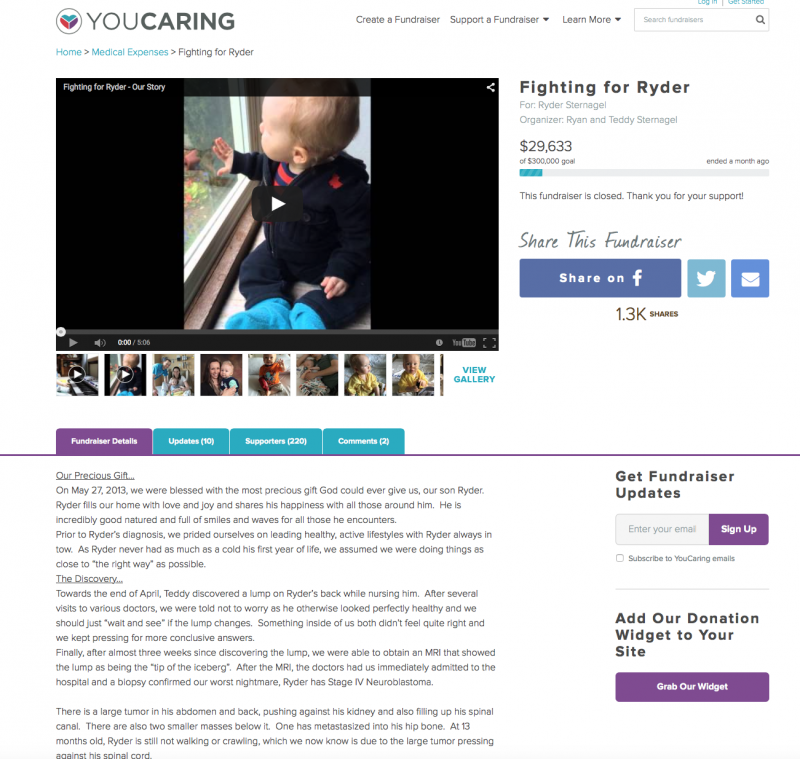 If only the insurance companies would realize they could get off cheaper and have healthier customers in the long run. Financially, they would be a lot better off, right?

Well, not quite. I couldn’t figure that part out for a long time until we watched a documentary called Wait Till It’s Free. Watch it sometime, after you’ve watched all the cancer and health documentaries in our resource section of course, if you want a great explanation of how everybody (except the patients, tax payers, and freedom) wins under the current system and even more so as it travels down the current path.

In the meantime, what can we do about it?

The system isn’t going to change tomorrow. I imagine it’s going to get a whole lot worse before it gets better in fact. It’s up to us to figure out how to afford the treatments, supplements, healthy food and lifestyles, etc. we know will give our kids the best shot to be the healthiest they can be.

We have been stumbling our way through this for a while now. Although I wish we’d done even better from the start and as I write this are currently thousands of dollars in debt, we’ve still been able to buy Ryder mountains of supplements, continuous integrative treatments, a small arsenal of expensive gadgets, and an endless supply of fresh organic produce for juicing and meals. And that’s what counts.

As you begin fundraising, always keep in mind delegation. You’ve likely got at least a few good friends and family members, as well as people you didn’t even know before who come out of the woodwork that really want to help. Let them! Delegation is key so you can focus more on your kid.

One more thing to keep in mind. This is a marathon, not a sprint. You need to have a balance of fundraising strategies that will pay off now, and in the future. Since some ideas will take longer to pay off, get the ball rolling sooner than later. You’ll be thankful when other avenues start to dry up.

Here’s what we did, and some ideas we thought of later that we wish we did, to support our journey.

Here are a few ways we helped our online campaign raise nearly $40,000.

Which Platform to Use:

Youcaring.com is an online fundraising platform specifically for medical issues and hardships. It has all the same features and capabilities as the more well-known platforms like Kick Starter or Go Fund Me, with the notable difference of not charging any service fees aside from the credit card processing fees charged by Paypal or WePay. Trust me, that extra three percent in (or out) of your pocket really starts to add up. YouCaring has a bunch of great tips on the site for how to pull off a successful fundraiser. Here are a few points of emphasis and additions from us.

Videos are a must:

To tug at people’s heartstrings and thus motivate them to donate, they need to get to know your child.

Seeing your kid babbling, talking, running around, etc. and the trials you have to overcome and how dedicated you are to helping your child will serve as a window into your lives.

A video is really the only way to get all of that across in a format people will quickly understand.

My cousin happens to be a film maker and put together an incredible video for us that I narrated myself. You can see it here for inspiration in addition to one Teddy put together a short time later to Ryder’s favorite music.

We heard numerous people tell us they were in tears the whole way through watching it. One such comment was accompanied by a $1,000 donation from a lady we had never met!

By the way, I recorded the whole narration in a quiet room in the hospital while we were inpatient. I tested out a whole lot of different voice recorder apps for my iphone and the only one I found that made a high quality recording which I ended up using was Recordium.

If your cousin isn’t a film maker, not a problem. Free video editing software can be easily found and downloaded online. A lot of people just use still pictures with text to tell their story with music in the background. Teddy made a very powerful video herself this way (that I referenced above) as a follow up to my cousin’s.

Once you have your video, the next step is obviously to get it seen by as many people as possible.

Start by sharing it on all of your social media pages with a quick explanation of what’s going on, and also ask that everyone shares the video themselves once they watch it.

It’s important to be very sincere and write from the heart so that people fully understand it’s a serious issue and feel compelled to help you in any way they can.

Next, ask all of your close friends and family members to share the video on their pages.

Ideally, if you can coordinate it without too much hassle, each posting would be staggered throughout the day(s) as people are online at different times. This would give the video the best chance to be seen by as many people as possible.

Just the few steps above gave us a very nice boost to get off the ground and start buying some big ticket items such as a juicer, infrared sauna, biomat, water ionizer, frequency generator, initial naturopath treatments, and our first massive round of supplement purchases without thinking twice (yes, we bought all of those things within the first month or so).

To keep the treatments and supplements going after the initial hype had died down however, we had to get a little creative.

What kept the sharing and donations going for us was sending personal messages to all of our “friends” on Facebook. We didn’t even need to be close to tell them what was going on and ask them to please share the video. We explained that every time it gets shared we get donations which allows us to continue treatment for our son.

Just sending five or ten of these messages a day, copying and pasting the same paragraph and personalizing a sentence or two, was all it took to keep up a decent momentum.

I did make sure to put the word “friends” in quotes however. The lack of response from a whole lot of people we thought we knew was pretty hurtful. You’ll definitely find out who your real friends are so be ready for that if you haven’t already. We still kept at it because it did pay off from those who helped and that’s all that matters.

What will really multiply this exponentially, is going back to your circle of close friends and family, and asking them to send similar messages to all of their contacts. I can’t stress the enough how important it is to delegate these sorts of tasks. This will allow YOU to have more time to research, formulate, implement, and modify your child’s regimen. Stress this importance to your inner circle!

Here are a couple ideas on getting huge boosts in traffic and donations to an online fundraiser.

We have seen friends get enormous boosts by getting a celebrity to share their fundraising page. If you or any friends know any level of celebrity that would be a no brainer. You could also assign reaching out to celebrities to one of your friends.

I just found out about this site so I have no clue how well it works, but looking at www.contactanycelebrity.com, it seems that the monthly membership fee (or just the free trial) would be well worth the cost for a couple months if it led to landing a celebrity or two. If anyone gives it a try, please let us all know how it went in the comments section.

Another booster we’ve seen people use is getting a segment on the local news. Be sure to point people to your online fundraiser so they know how and where to go to help!

In the end, I’m by no means an expert on any of this. I’m just a guy whose kid got cancer and figured this stuff out along the way.

The master of online fundraising in my opinion is, Ryan Luelf. Be sure to listen to his podcast episode for some great fundraising wisdom.