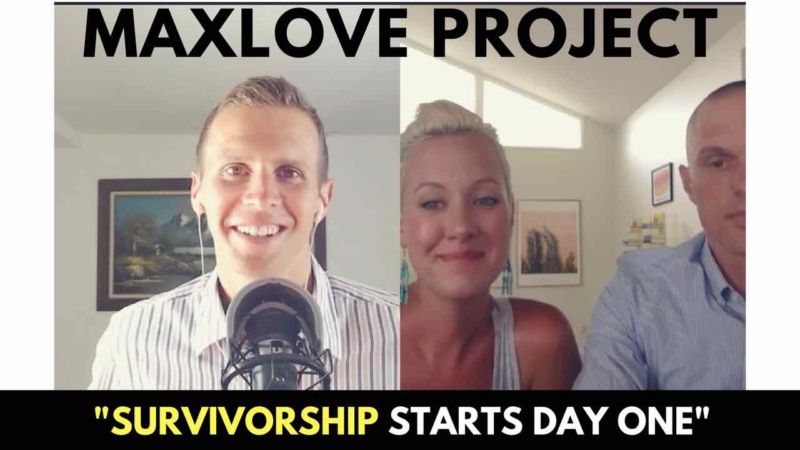 How to Do Childhood Cancer: Audra & Justin Wilford of MaxLove Project

With that in mind if you’re an adult interested in adult things not to worry just like the information usually crosses over quite nicely from adult to child I promise you there is plenty of really good insights in here for you as well.

The Wilford’s actually had a hard time getting their son diagnosed with cancer even knowing something was very wrong. This is a story very familiar to us at The Stern Method and thousands of parents around the world. By the time they were able to get a proper diagnosis, the glioma had grown out of the stem into the cerebellum.

Max was then rushed to a larger hospital with brain hemorrhaging and taken right into surgery. The neurosurgeon told Audra and Justin that if they had come any later there would not have been anything he could do but as it was he was at least able to get them out of the woods temporarily.

Max would be left in the hospital unable to walk for four weeks.

Going forward the picture painted for the Wilfords by Max’s oncology team was not a very bright one. The discussion was not a curative one but rather centered focused on life extension. Max’s oncologist told them that at some point, the efforts to increase quantity of life would override Max’s quality of life and that’s when they would need to stop.

Audra actually managed to take this as an empowering discussion. What she left the conversation with was “there’s something we can do,” and they went about finding out what exactly that would be.

Their first introduction to a more holistic way of thinking about cancer was when a friend gave them the book Anticancer: A New Way of Life. This is what initially got the Wilfords thinking in a much broader way. They realized that there was no silver bullet, that anticancer was indeed a way of life had to include everything from their food to physical activity to their relationships and so on.

This also made them feel better about proceeding with the conventional oncology which they were of course a bit uncomfortable with. Audra and Justin decided they were going to let the doctors and hospital staff have their domain, but the Wilfords would also do everything they could within their own domain.

They began to get more clarity in a world of very conflicting information when it comes to researching integrative approaches to cancer. With the alternative community presenting them with every little known herb in the Amazon and saying not to do any conventional treatment whatsoever and the conventional community telling them to not look at anything besides what they had to offer, The Wilfords decided to let the research be their ultimate guide.

They gathered the best evidence they could within their space of comfort on both sides, looking at data for chemotherapy, nutrition, and supplements, and other lifestyle and complementary practices. With Justin’s background and education in research and Audra being a chef in training, they started making it all work.

Alongside chemotherapy the Wilfords implemented acupuncture, a long list of supplements including medicinal mushrooms, and many other complementary interventions. They also removed all sugar and switched to a whole food diet.

Throughout treatment although Max would become neutropenic here and there, the side effects never became more severe. He never got sick, never had a fever, never went to the ER. The Wilford’s only trips to the hospital were for routine appointments.

If you’ve been through any form of conventional treatment, you know that’s a big deal.

Despite their initial success, after a watchful waiting period of one and a half years Max experienced disease progression. A scan revealed that extensive spreading throughout the brainstem.

The Wilford’s agreed with the oncologists that radiation needed to be in Max’s plan, but around this time they were also discovering research on the ketogenic diet. They found literature suggesting both anticancer and protective effects from conventional treatment.

The research was compelling enough that Audra and Justin decided they were going to implement it no matter what. They did want their oncology team to be on board however.

Coming from an academic background Justin knew the best way to present a case to his oncology team was a compilation of published medical literature (as opposed to blog posts). He put together a research packet and presented it to the team.

After a couple weeks they heard back that not only was the oncologist on board, she would be writing up a protocol to formally study the diet.

Max went into ketosis in September of 2013 in the midst of spreading disease. By November with no other treatment, the cancer had halted.

Audra notes that when you’re familiar with the way cancer works you know that once it’s progressing, it doesn’t just stop on its own. Something needs to make it stop.

When Max did go through the radiation in early 2014, he did not any anesthesia for the pain or steroids to control swelling or other side effects. This again, is virtually unheard of.

Post radiation Max realized a reduction and regression and stayed in full ketosis through early 2016.

After what they thought was enough time, Audra and Justin eased Max off of the strict ketogenic diet into a more basic low carb diet. Max wasn’t asking for junk food by any means, but he did want whole food carbs.

Unfortunately a scan in July of 2016 revealed new evidence of disease within the radiation field. The Wilfords were presented with the options of chemotherapy or gamma knife radiation.

Audra and Justin knew that chemotherapy was unlikely to reach the brain stem any better than it had the first time. Although Max had already received what was technically his lifetime limit of radiation, as he exceeded everyone’s wildest expectations the first time they decided to proceed with gamma knife back in full ketosis.

With the way gamma knife radiation works, cancer actually typically looks to be enhanced well after one year post radiation.

Max had nine month scans in mid-2017 and again produced a result literally like nothing the oncologists had ever seen. Completely normal.

Max is now 10 years old and remains in full ketosis. Before starting radiation Audra and Justin were told Max’s learning and development would be severely impaired. So much so that he would have a hard time with even basic symbols.

Instead, Max loves math. He loves to sew and do arts and crafts. And he’s a good baseball player to boot.

Max does have an individualized education program but is advancing through it beautifully.

After their six year journey through childhood brain cancer, Audra points back to their initial laser focus on quality of life and never losing sight of it. That initial focus did indeed bring about an incredible quality of life, but also a quantity of life that no one had expected.

MaxLove’s Approach to Evidence Based Medicine

Having a background in academia and now working on his second PhD, Justin Wilford is likely well qualified to have an opinion on the meaning of evidence based medince.

He points out that in the “true” medical sciences, the gold standard is hardcore randomized controlled trial. Anything short of that must be thrown out.

Really though, we need to be looking at all available data. And weighing this data in terms of costs and benefits.

Speaking of evidence, the Wilfords note the overwhelming amount of evidence that processed foods contribute to the staggering amount of risk childhood cancer survivors already face. So it’s probably a good idea to cut those out. For anyone of course, but especially for kids healing cancer.

Justin points out that we need to be doing everything we can, with a strict whole foods approach front and center, to stack the deck in our kids’ favor. They need to beat the odds in the most literal sense, as 95% of childhood cancer survivors will be facing a chronic illness by the time they are 45 years old. 85% of those kids’ illnesses will be life threatening.

So take something like curcumin. It’s been used in traditional medicine for thousands of years. Science shows it to be a very powerful biochemical. Petri dish and animal studies show a vast and compelling array of anti-cancer properties. And it has no risks…

So we’re going to reject it because there aren’t random controlled trials on it?

And this shouldn’t be just be read in the pro natural medicine context. If we’re being truly honest, chemotherapy has extremely high success rates with several childhood cancers. Much more than adults.

If you’re a family dealing with one of these cancers, ALL for instance, even if you’re gung-ho alternative medicine these rates need to be taken into serious consideration.

When speaking of percentage survival rates, Justin also adds in that all of these studies were done in the context of the standard American diet with little or no other complementary interventions. I personally would just augment that by saying there are no studies on your family and everything you are doing for your child.

The Wilfords invites us to imagine a time where the protocols for childhood cancer were written up in a fashion that erred on the side of caution in light of toxicity. A world where treatment decisions would be made based on individual genetics and nutritional information. Where doctors felt free to deliver chemotherapy in a way that makes sense for the individual child to the as opposed to following a “standard.”

We happen to be pretty big proponents of all this here at The Stern Method as well! ☺

Audra and Justin Wilford founded the MaxLove Project in 2011, just three months after their then 4-year-old son, Max, was diagnosed with brain cancer (mixed-grade glioma). Following a difficult partial-resection surgery and the start of one-and-a-half years of chemotherapy, the Wilfords decided to become full partners in Max’s treatment, recovery, and survivorship. By consulting with doctors, researchers, and other cancer families, they began to find out what they could do, in addition to the standard treatment, to improve Max’s functioning, pain levels, energy, and future survivorship.

Whole food nutrition, good sleep hygiene, kid-friendly physical activity, and stress management techniques like acupressure, massage, and breathing were just a few of the evidence-based practices that helped Max thrive through treatment and into survivorship. Today, the Wilfords direct the MaxLove Project with the mission to increase the quality of life and reduce health risks for all children fighting cancer in treatment and beyond.

Previous episode: How to Unleash the Power to Heal From Within with Razi Berry