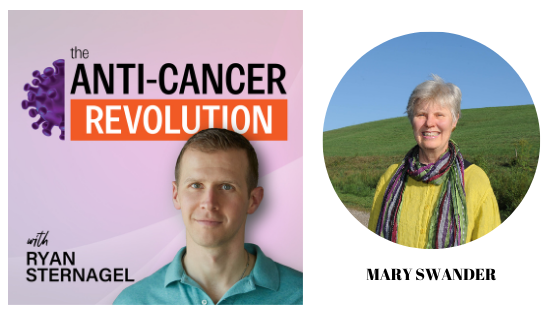 Mary Swander is an award-winning American author, dramatist, performer, speaker, and teacher. She is the former Poet Laureate of Iowa and a professor emerita Distinguished Professor of Iowa State University.

Mary is the Artistic Director of Swander Woman Productions, a theatre troupe that performs dramas about food, farming, and the wider rural environment. She is also the Executive Director of AgArts, a nonprofit designed to imagine and promote healthy food systems through the arts. Her latest book is The Maverick M.D.: Dr. Nicholas Gonzalez and His Fight for a New Treatment for Cancer (New Spring Press).

The Maverick M.D. is the story of how Dr. Nick Gonzalez perfected the scientific theory behind Dr. William Kelley’s work and put the protocol into practice in New York City. Gonzalez drew courage from his Christian faith, from Mexican-Italian-American family, and from key loved ones, colleagues and mentors.

He spent years treating patients with the most serious conditions–from cancer to diabetes to lupus. But he wasn’t satisfied as an outlier in the medical community. He wanted his work put to the test with a clinical trial.

This book portrays a man who fought for the acceptance of a nutritional cancer treatment in the halls of some of the most established U.S. medical institutions. Against intense opposition, Nick Gonzalez’s determination held up until the end–a scientist who developed a therapy that saves lives and promotes the healing of the human mind, body and spirit.

Ryan takes a candid look at Dr. Nicholas Gonzalez’s life and “the man behind the suit” in the discussion with his biographer, Mary Swander. You’ll learn about why Ryan thinks so highly of Dr. Gonzalez, his life and personality, the Gonzalez Protocol and the results it produced. Ryan and Mary delve into Dr. Gonzalez’s attempts to take his enzyme therapy protocol to clinical trials in the conventional medical arena. They also discuss Mary’s experience as a patient of Dr. Gonzalez for over 20 years. You’ll gain insight into the brilliant mind of Dr. Gonzalez, his spiritual life, his concept of balance, and his mysterious death. And speaking of brilliant minds…at the end, you’ll be treated to a special creation by Ryan’s son, Ryder!

5:15 What was the paradigm shift which caused Dr. Gonzalez to go into the realm of unconventional medicine?

11:45 Mary Swander’s experience as a patient of Dr. Gonzalez

21:25 The experience of trying to explain unconventional healing to conventional medical practitioners

25:00 Combining the physical with the meta-physical/spiritual world

29:00 Dr. Gonzalez’s personality and drive to develop his program

1:02:15 Clinical study of the Gonzalez protocol

If you have a question or comment about this episode let us know below!!