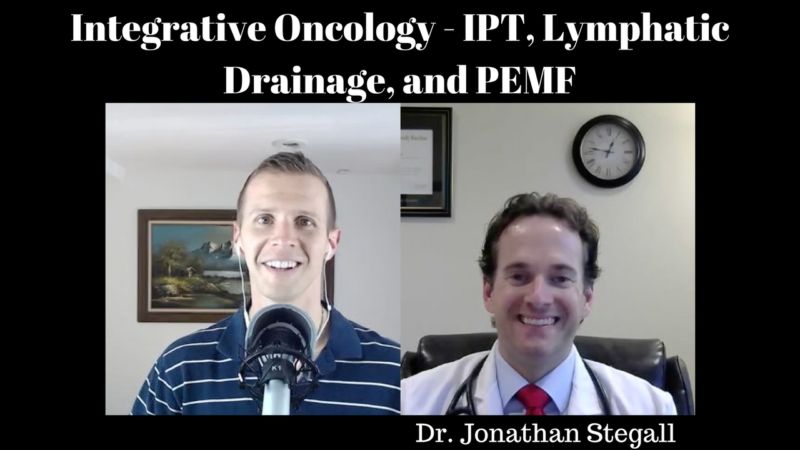 Dr. Jonathan Stegall talks about his unique integration of conventional and integrative therapies.

In This Episode & Article:

How the Dr. Jonathan Stegall Interview Applies to Childhood Cancer

We found out about Insulin Potentiated Low Dose Targeted Chemotherapy (IPT for short) early on when researching for Ryder and certainly thought it would be a good compromise between those saying we should attempt to go all natural and those advocating for the standard of care.

Unfortunately due to the political climate surrounding childhood cancer and the potential consequences from any deviation outside of the norm we were (and still are) unable to find an IPT practitioner able to perform the procedure on a child.

Since the standard is mandated for most children whether the parents like it or not, this would actually just result in more chemo than the child is getting already which clearly wouldn’t make much sense.

Until the “laws” around how much choice parents have in their child’s cancer treatment this will remain something only available to adults.

We were (and still are) however, able to do everything else Dr. Stegall mentions he recommends on a regular basis. All of the supplements you see listed in the “resources mentioned” section were staples that Ryder got early on and we continue to rotate through all of them. So personally I was certainly glad to hear the list!

Sound therapy (music with frequencies shown to promote healing) is another no-brainer for kids! Given the fact that it can be more difficult to get supplements into a child on a consistent basis, anything we could do that didn’t involve ingestion such as this we were all over.

Dr. Jonathan Stegall’s Take on Misinformation on Both Sides

With one foot on both sides of the aisle, Dr. Stegall had things to say that rubbed him the wrong way about information coming out of both the conventional and alternative communities when it comes to cancer treatment.

His biggest problem with the conventional side lined up close to many others’. By the time a traditional medical doctor gets out of medical school firmly entrenched in that system, they tend to have the mindset that if they have not learned about it then it must not be valid.

It’s also worthwhile to point out, as Dr. Stegall did, that doctors are confined to the working within the insurance model. If insurance will not cover a particular supplement or treatment then in their position they really are not even able to recommend it. This gives them little incentive to look into things that they know they will likely not be able to prescribe even if they were open minded enough to investigate.

On the alternative side, Dr. Stegall’s general sentiment is that the internet can be confusing and lead people down many paths that might not be the best for them. Often he will see patients that have tried to go it their own on the natural side with dismal results, not lack of effort or research.

Dr. Stegall notes that stories on the internet aren’t always true, and that just because something worked for one person doesn’t mean it necessarily is going to work for another. At the end of the day this is why we need to continue to research and educate ourselves on how we can best help ourselves.

Dr. Stegall also differs from conventional wisdom (on the alternative side) that surgeries and biopsies should generally be avoided. The concern is that by cutting into a tumor the potential is there to release cancer stem cells and spread them to other parts of the body whereas they would have otherwise stayed within the confines of the tumor.

He notes that the tumor is what is seeding the rest of the body with cancer so if his patients are a candidate he always recommend they proceed with surgery. He also noted a Mayo Clinic study done on the safety of biopsies that found no risk and that patients who received biopsies actually had overall better outcome statistics than those that did not.

Concerning biopsies in particular Dr. Stegall says that we need as much information as we can get for the best possible treatment strategy. Knowing the histology and genetic variations, and confirming that it is indeed cancer for that matter, is vital to determining an optimal course of treatment.

Where Dr. Stegall likely differs most from previous guests on the show is his use of chemotherapy. He uses it far differently than what you would be offered in a regular hospital however.

The first differentiator is the use of insulin potentiation. Meaning since it’s known that cancer cells have many more insulin receptors than healthy cells, along with the chemotherapy insulin is also administered so that the cancer cells will “gobble more up” than they normally would.

This technique allows a dramatically lower dosage to be used with the same effect. Since the dose is so much lower and “targeted” to the cancer cells there is also a notable reduction in side effects meaning less damage to healthy cells.

Dr. Stegall notes that he uses a more frequent schedule at the lower dose to prevent resistance from developing in surviving cancer cells.

He’s also very proud of the fact that while he wouldn’t venture to say that there are no side effects whatsoever, there has only been three times in many years of practice that he’s needed to resort to drugs to artificially stimulate cell counts back to where they need to be, whereas this occurs more often than not in conventional treatment.

Dr. Stegall also made the note that if iron counts do come down, he like to use an iron glycinate supplement as opposed to an ordinary iron supplement for improved absorption.

Dr. Stegall takes in a variety of factors when developing a protocol for an individual patient.

He wants to know what they’ve been exposed to such as pesticides or chemicals in the air which can of course lead to cellular inflammation and cancer.

He also takes location into account. A tumor on the surface will be more affected by things like phototherapy than one deep down. Or in cases of cancer in the lungs he has patients inhaling colloidal silver and glutathione.

No matter what, there are a few things Dr. Stegall basically always recommends.

No surprise here, he always recommends a purely organic diet high in plant matter with minimal animal protein. He doesn’t believe it’s necessary to be vegan but that the majority of our caloric intake should come from plants.

He also said in cancers that are highly glycolytic, meaning they really light up a PET scan and are therefore taking up high rates of sugar, patients may want to reduce carbs (the never ending debate continues! Although at least here we’re given a little more means of determining what is right for us).

Dr. Stegall also noted that survival statistics for those who exercise are far better than in those that don’t. Same goes for stress reduction.

Supplements. There are a few Dr. Stegall recommends almost regardless of the patient or cancer. Beta 1, 3D Glucan for immunity, curcumin and green tea (specifically a brand called Capsol-T) for the diverse anticancer effects of the polyphenols associated with them, vitamin D as almost everyone is deficient in it and there is so much data linking low levels to cancer promotion, and MitoCore and Poly-MVA for mitochondrial support.

Dr. Stegall also consistently recommends IV vitamin C. We did ourselves (along with pretty much everything above) for Ryder while he had a port in and then switched to liposomal vitamin C once it was removed.

Watch the video or download the podcast to learn about Pulsed Electromagnetic Fields, Lymphatic Drainage Therapy and Sound Therapy along with much more depth on all of the topics above and so much more. This was a GREAT interview for anyone taking an integrative approach.

Dr. Jonathan Stegall is the founder of The Center for Advanced Medicine in Johns Creek, GA. Dr. Stegall has a true passion for providing the best cancer care for his patients. He practices integrative oncology, which involves combining the best of modern medicine with natural therapies. This advanced form of cancer treatment, Dr. Stegall believes, should be safe, effective, and tailored to each patient’s specific and unique needs. As a result of his specialized form of medicine, and his compassionate personality, patients travel from throughout the country to be under his care.

Dr. Stegall has a bachelor’s degree from Clemson University, graduating with honors, as well as a master’s degree in physiology from Georgetown University. Prior to starting medical school, Dr. Stegall conducted research on the doctor-patient relationship at Harvard Medical School. After earning his medical degree from the Medical University of South Carolina, he completed his internal medicine residency through the Yale University School of Medicine, with clinical training at Greenwich Hospital and Yale New Haven Hospital. During this time, he conducted rotations in integrative oncology and began developing his own unique approach to cancer treatment. Dr. Stegall has also completed a fellowship in Integrative Cancer Therapeutics through the Metabolic Medical Institute, affiliated with the University of South Florida Morsani College of Medicine. Dr. Stegall is a member of the American Society of Clinical Oncology (ASCO), the International Organization of Integrative Cancer Physicians (IOICP), and the Society of Integrative Oncology (SIO).