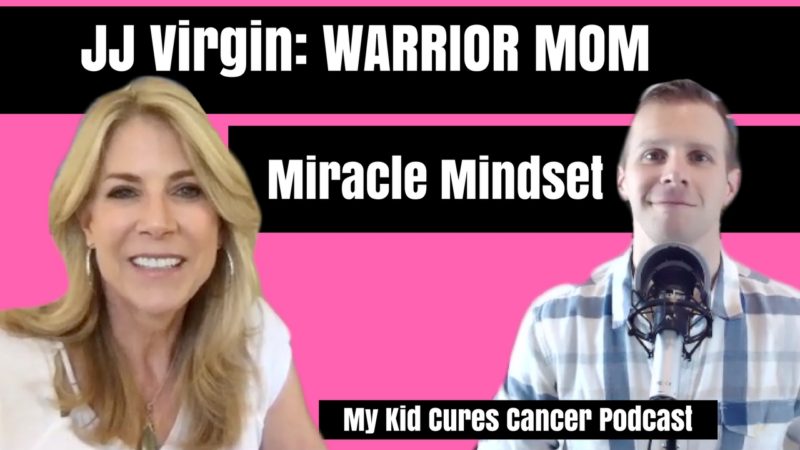 Celebrity nutrition expert and Fitness Hall of Famer JJ Virgin teaches clients how to eliminate food and carb intolerances so they can transform their health and their lives. As co- host of TLC’s Freaky Eaters and health expert on Dr. Phil, JJ is a prominent TV and media personality, including appearances on PBS, Dr. Oz, Rachael Ray, Access Hollywood, and the TODAY Show. JJ is the author of four NY Times bestsellers: The Virgin Diet, The Virgin Diet Cookbook, JJ Virgin’s Sugar Impact Diet, and JJ Virgin’s Sugar Impact Diet Cookbook.

Her latest book, Miracle Mindset, shows warrior moms how to be strong, positive leaders for their families, while exploring the inspirational lessons JJ learned as she fought for her own son’s life. JJ hosts the popular JJ Virgin Lifestyle Show podcast, with over 3 million down- loads and counting. She also regularly writes for Huffington Post, Rodale Wellness, Mind Body Green and other major blogs and magazines. In addition to her work with nutrition and fitness, JJ is also a business coach and founded the premier health entrepreneur event and community, The Mindshare Summit. Find articles, recipes, helpful online programs, and more at www.jjvirgin.com

This was a really, really meaningful interview for me to get to record.

Most of you know the story by now that Teddy and I were getting really into health and fitness for a good period of time before Ryder was diagnosed. Because of that we were able to hit the ground running from a research perspective.

But because of JJ, also from mindset perspective.

We’d heard an interview with her early on talking about the traumatic brain injury her son Grant sustained. All the doctors told her he had little to no chance of living through it.

The mindset she kept going through it to stay operating at a hundred twenty percent for her son resonated so much with us we started following her because of it.

Not long after that Ryder was diagnosed and we did go into that thing guns blazing much more so than if she had never put that spark in our minds!

PLEASE watch this interview with JJ Virgin on YouTube or listen on iTunes as whatever I write here isn’t going to do JJ’s story justice so I will keep it extremely brief.

JJ’s sixteen year old son Grant was hit by a car, the driver of which fled the scene.

He did not have ID on him and was airlifted as a John Doe. The only reason they ended up finding out was because Grant’s dad and brother happened on the scene and a witness commented that Grant looked just like his younger brother.

The three of them drove through the night to the hospital with no information on Grant’s condition.

When they arrived the doctors informed them Grant had a torn aorta which kills 90% of people on the scene. For those who survive, it will usually rupture shortly within 24 hours. The chances of that happening go up another 10% every hour.

Before that surgery could take place, Grant needed brain surgery to stop the bleeding… but that needed to happen at a different hospital.

JJ’s other son Bryce asked the doctor if he would sum that up by saying Grant had about a 0.25% chance. The doctor confirmed.

Go figure, Grant survived the airlift and the surgery.

JJ stayed with her son for hour and a half months inpatient in two different hospitals. Much of the time early on Grant was in a coma.

Five years later, JJ is working on her commitment to Grant when the ordeal first began that he would be 110% of where he started before this whole ordeal began.

They’ve already met that mark in many categories, and are working on the rest.

Having a conversation with Grant (who now walks and talks just fine along with playing sports and so on), you wouldn’t know anything ever happened.

JJ had no idea if and when Grant was coming out of the hospital. She also knew she was not going to be able to get him the help he needed without finances… because we all know none of the good stuff is covered by insurance.

JJ also happened to have all of her money invested in what was going to be her big breakout book The Virgin Diet, set to be released two weeks after the accident. So that had to happen.

JJ also points out something very important, medical errors or “death by doctor” are the third leading cause of death in America. A recent Johns Hopkins study revealed that medical errors account for over 250,000 deaths per year in the US.

So JJ knew she wasn’t leaving Grant alone… And she had to do all of the publicity work to launch a book… And all of the research and implementation to save his life.

What JJ did to accomplish all of this, was take care of herself first.

If you don’t take care of yourself you drag everyone else, most notably your child, down with you.

Energy is contagious, and you need to be the shining light that spreads into your children. JJ kicked doctors out of the room who suggested Grant would end up realizing anything less than a 110% recovery.

Just some of the things JJ mentioned she did to take care of herself and pull all of this off to save her son were:

Early on while she didn’t know what was going to happen to Grant, JJ stuck to the same story in her head that we did with Ryder: There’s always something else you can do.

If what you’re doing isn’t working or you need it to work better, try something else. Keep trying until you figure it out.

Some of the mindset trainings JJ received that made all the difference for her in showing up 120% day in and day out during their stay at the hospital were:

Since this whole article was inspiration and information on how to be the best parent and caregiver to your kid possible I’ll keep this brief.

The overarching theme of our Childhood Cancer Navigation Program seems like a good way to wrap up.

You are the CEO of your kid’s health.

You’re the boss. The responsibility falls on you and everyone needs to listen to you. If they don’t they’re fired.

The CEO isn’t a marketing expert or an operations expert or a finance expert, that’s what his CMO, COO and CFO are for. They make recommendations on they’re individual areas of expertise, and the CEO decides given his unique view of the company (your kid!) as a whole.

Go take ownership of your kid’s health, and hire and fire as you see fit!