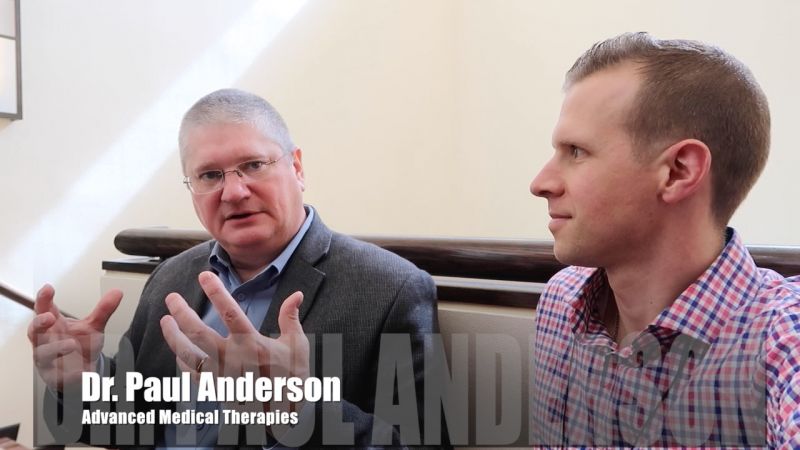 Cancer is a Polyfactorial Disease

An Interview with Dr. Paul Anderson of Advanced Medical Therapies

Shortly after Ryder was diagnosed in Seattle we were pointed to Dr. Paul Anderson of Advanced Medical Therapies, and to this day are so grateful that we ended up seeing him in particular for all of our “extra-curricular” activities outside of what we were being given in the hospital. Dr. Anderson was exactly the guy we needed to be consulting with at the time as he was extremely well versed on all of the natural stuff we were finding on our own as well as chemotherapy and how any combination of the two sides would interact with each other. Finding someone such as this is crucial for parents and patients alike doing an integrative approach as you’ll be confident that everything you’re doing will not have any negative interactions (and likely a whole lot of positive ones) and therefore go at your protocol 100% to give it the best possible chance of working, both to beat the cancer and mitigate undesirable side effects from the conventional treatment.

I saw Dr. Anderson for the first time since we moved in 2014 at this year’s Oncology Association of Naturopathic Physicians conference just after his keynote lecture on epigenetics and targeted cancer therapies. He’s even smarter than I remember and it was a real treat getting to pick his brain again after over two years of continuing my research!

Since his talk was on epigenetics, the study of how different environmental factors can turn genes on and off, and how they apply to both the cause and treatment of cancer I was very excited to get his take on the other theories we hear so much about – cancer as a metabolic disease, a microbial infection, a misplaced trophoblast and so on. I was very glad to hear that his take on it is right in line with where I am right now on the issue. Everybody’s probably a little bit right in that all of these issues are real things that deserve attention, but it would be unwise to focus on any one theory in particular and eschew the others.

Cancer is a Polyfactorial Disease

As Dr. Anderson put it, cancer is a polyfactorial disease. Any one source issue could be the initial cause, but likely all of them are aggravators that need to be addressed. Cancer could start off as a metabolic issue and morph into something else entirely. He brought up a lady in particular he was seeing with breast cancer who was only interested in pursuing the metabolic approach – the ketogenic diet and so on. Impressively she kept it away for several years with that alone, but it did eventually come back “like a freight train” when it finally figured out a way around and she was not addressing the other issues. His takeaway message there is if something is working for you, that’s great, “but let’s make sure the other fires are calm too.”

This concept also applied to his talk on epigenetics and the targeted, individualized genomic therapies that are becoming more prevalent in mainstream medicine today. Even if you can identify a clear target, focusing on that one particular target will only work for so long, “and you need to be sure to be hitting all the OTHER targets too.”

The Key to Cancer is Rotation

When I asked if there were any particular therapies or supplements Dr. Anderson usually ends up recommending across the board regardless of the patient, he brought it right back to this concept. While he does like polyphenols such as curcumin from turmeric or ECGC from green tea, he rotates through them. He made the point that staying on any one particular plant or compound in perpetuity will start to bring diminishing returns in a big way.

So the action item here is rotation. Rotate your supplements. Rotate your energy medicines. Rotate your diet. Rotate your detox procedures. The thought can be overwhelming as it means continual thought and research, but on the flip side it can be comforting. The most common complaint I hear when someone gets into natural cancer healing is there’s too much information and too many supplements and therapy options and how are we ever supposed to choose which ones?? The answer is you don’t have to choose. Do some of them now and some of them later!

We’re working for ourselves on a master rotation schedule that takes EVERYTHING into account, and when we do we’ll be sure to make it available to you, but in the meantime just keep this concept of rotation in mind for everything and you’ll certainly be better off for it.

Watch the video in this article for my full interview with Dr. Anderson including his Three Golden Rules to staying healthy and disease free!

You Need a Naturopathic Oncologist!

Finding a great naturopathic oncologist such as Dr. Anderson is as easy as visiting the Oncology Association of Naturopathic Physicians’ directory. There you can find one near you, or one you’d be able to consult with over the phone. As we all know there are no easy answers with natural or integrative oncology and consulting with one of these doctors is in my opinion a must have part of the journey.