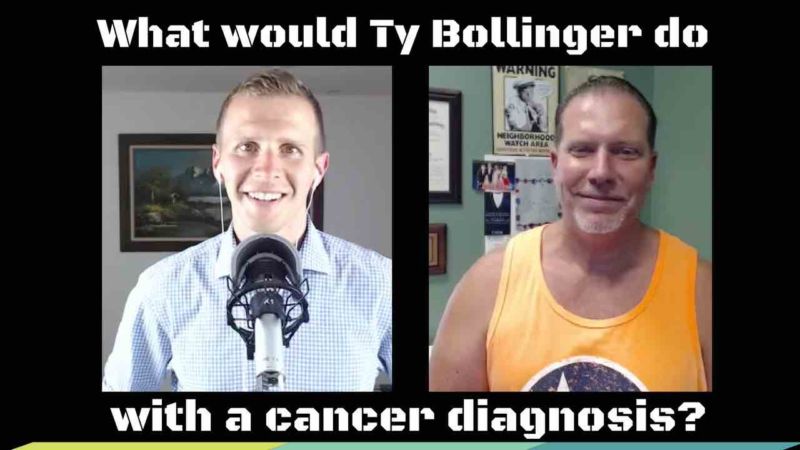 Ty Bollinger, founder of The Truth About Cancer, tells us what he would do personally to heal from cancer!

How the Ty Bollinger Interview Ties Into Childhood Cancer

He made the note that pets are a lot like infants and children, in that they only get what we give them. It’s our responsibility really do our research and be entirely cognizant of what we are and are not putting into them.

Many people feed their dog the cheapest dog food made entirely from filler ingredients not to mention GMOs and pesticides. Apparently vaccine doses at the vet aren’t even weight dependent. So apparently when our ten pound Chihuahua was vaccinated back before we started paying attention to this sort of thing he was getting the same dose as a 150 pound mastiff. So is it any wonder that the cancer rate for dogs now is actually higher at 1 in 1.6 than it is even in humans?

My point here is not to go on a tangent about pet cancer, but to emphasize the point I made during the interview that to a large degree our society is losing grasp on this concept of responsibility over what goes into those that depend on us to be informed even with our own children.

From a prenatal perspective, children are now born with hundreds of chemicals inside of them day one. Many if not most of those chemicals are carcinogenic. What have you as a couple done to clean yourselves out before you conceive?

For an everyday family, why is it that “kids’ food” tends to equal the unhealthiest garbage one could imagine? It always blows my mind when I see parents making themselves a salad and feeding their kids mac ‘n cheese and chicken nuggets day in and day out. Don’t get me started on the hospital telling cancer parents to just feed their kid “anything they will eat” on that note.

For cancer families, we must take this responsibility the most seriously of all. We may not always have a choice when it comes to whether or not our children will receive basic conventional treatment, but whether or not they are as protected nutritionally as possible while they get it along with getting the bad stuff flushed back out of them as quickly as possible after it has served its intended purpose is entirely up to us.

Aside from standard treatment there are all the other substances that are proposed to be pumped into our children along the way that we do have much more of a say in.

What is the purpose of that GMO dextrose drip again and are there any ways we can accomplish that naturally?

You me to put my child on Miralax for constipation due to treatment, but what’s this I’m reading about it sharing ingredients with antifreeze and causing all sorts of psychotic episodes in children?

Is it really necessary to do a PET or MIBG scan and inject my child with radioactive substances every single time we do a scan or will an MRI be sufficient to give us a general idea of which direction the cancer is headed?

You get the picture. We need to ask questions about everything that is proposed to go into our children. We also need to ask ourselves if they’re getting all the good stuff they can from us or if we can be doing more.

They’re not capable of doing research and making decisions on this sort of thing for themselves. That’s what they depend on us for.

What Does Ty Bollinger Make of All the Different Opinions on How to Heal Cancer?

The point that Ty came back to several times is that after years of interviewing health experts all over the spectrum of opinions, and cancer survivors that have healed naturally from countless combinations of approaches, the conclusion he has come to is that there is no one “right” way to heal cancer.

Moreover, different approaches are more than likely going to have different levels of success for different people. If anything we should likely be discussing the best way to find the best approach for the individual rather than arguing about what’s best for everybody.

Ty also made the point that at the end of the day, it’s not any particular approach or treatment that heals cancer. It’s the body.

The approaches in treatment in question are simply giving the body fuel to do what it needs to do. We can get that fuel from a variety of sources, but as long as it gets enough the body will do the same job using different ingredients.

Would Ty Bollinger Do Keto or Gerson?

Ty says that given what has worked for him in best in experimentations with his own health, he would opt to start with the ketogenic diet. The evidence that removing the primary fuel source from cancer cells kills many of them off and weakens the others is certainly there, and the approach has worked for many.

Ty noted that normal healthy cells are perfectly capable of running off of ketones produced by the body when there is a lack of glucose, whereas cancer cells are not.

I was glad though that Ty emphasized intermittent fasting as a key component to the diet. He stated that he would (and does most days anyways) compress his eating window into roughly six hours, with the remaining 18 hours of the day reserved for using his energy to heal rather than digest.

I personally believe too often the ketogenic diet gets equated in people’s minds with just eating big plates of bacon all day. If we’re really going to benefit from this type of approach fasting and clean food need to be key components.

On that note Ty noted that he would be (and does) loading up on high quality super greens and other nutrient dense foods while taking that approach. Another key component that needs to be worked into the discussion with more regularity when talking about ketosis.

There will actually be a couple presentations on getting as many nutrients as possible in at the upcoming The Truth About Cancer Live conference this weekend which is free to stream live from home.

What Ty Does for Detox and Exercise

The most important thing in my opinion that Ty noted about detoxification (aside from being extremely important) is that he believes in a lifestyle of daily detoxification rather than letting it all build up and doing a big cleanse once every so often.

His favorite method for accomplishing this is an infrared sauna. This happens to be our favorite as well!

Ty makes the point that far too many people these days do not sweat whatsoever. They do whatever they do for work in some sort of office setting, come home and hang out with their family, eat dinner, watch some TV, and that’s about it.

Ty’s favorite way to ensure he gets exercise in, in the most anticancer way possible, is with a rebounder.

A rebounder is a mini trampoline. It’s fun, one of the most efficient methods of exercise possible, and one of the best ways to pump your lymphatic system (our bodies’ drainage system which does not pump itself).

An adult rebounder is certainly a bit of an investment (but worth it!) as it needs to be very high quality to hold the weight and retain its form year after year. Kids’ mini trampolines however are incredibly affordable and a no-brainer for a fun way to get them doing something incredibly good for them.

Ty Bollinger is a happily married husband and father, Christian, CPA, health freedom advocate, health researcher, former competitive bodybuilder, talk radio host, documentary film producer, and best-selling author. After losing several family members to cancer (including his mother and father), Ty refused to accept the notion that chemotherapy, radiation, and surgery were the most effective treatments available for cancer patients.
In 2006, after almost a decade of cancer research, he published “Cancer – Step Outside the Box” which is now in its 6th edition and has become a best-seller. In the spring of 2014, Ty and his wife Charlene teamed up with Jonathan Hunsaker forming “The Truth About Cancer” and proceeded to travel across the USA and interview the most renowned doctors and scientists about treating cancer naturally. They eventually produced the docu-series entitled “The Quest for The Cures” and “The Quest for The Cures…Continues.” This docu-series was viewed by over 2 million people worldwide. In 2016, Ty released “The Truth About Cancer” book, which was a follow up to the docu-series with the same name.