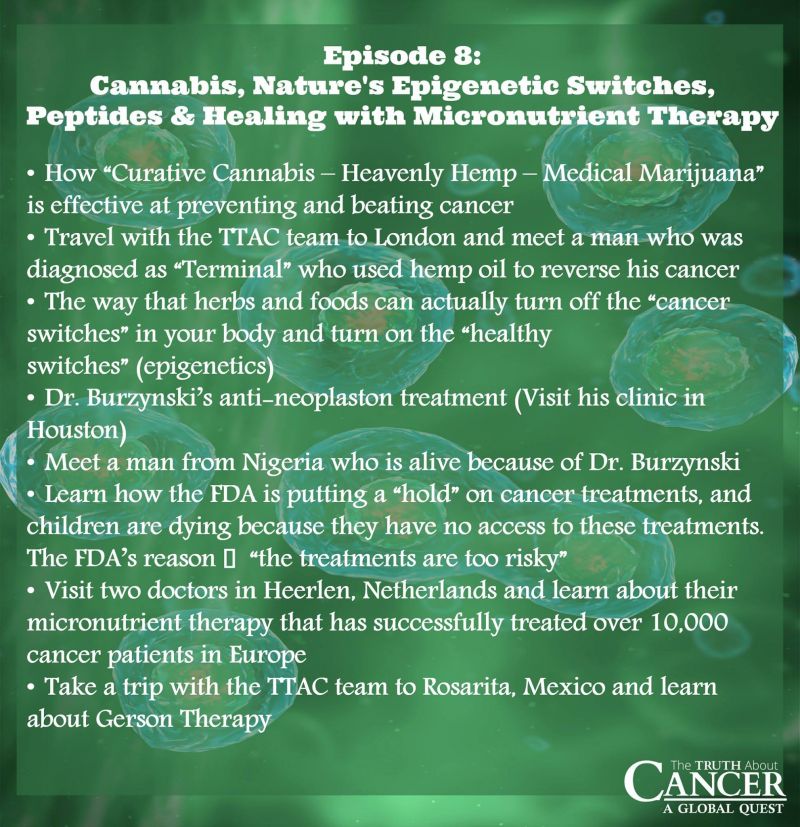 The Truth About Cancer: A Global Quest, Recap Episode 8

Lots of hard science in last night’s episode! Ty started off with a long interview of Dr. Mathias Rath and his lead researcher Dr. Aleksandra Niedzwiecki. Time and time again through my own research for articles and in watching this series, the notion that there just isn’t any hard data or science published and validated on anything but chemotherapy, radiation, and surgery gets completely blown out of the water. I think it was Dr. Rath that pointed out that it’s not like these studies are only in obscure journals either, oftentimes they’re published in the same prestigious medical journals as the chemical drugs are. All a doctor has to do, if he can find the time, is hop on PubMed and do a simple search on any one of these therapies, the same thing I do to write my articles, and he’ll be bombarded with information on it. I forget the exact number of times these two doctors said they had been published themselves, but it was a lot. Dr. Rath noted that when he intially started working with Linus Pauling on vitamin C therapy, they thought the world would be so excited by the discoveries they were making. Instead, he’s been in court for over 100 different lawsuits just to defend his work…

I mentioned this combination of micronutrients and how to go about getting them into your kid in my article on vitamin C a while back, but learned something new about it tonight. The base combination of nutrients, is vitamin C, ECGC which is an extract of green tea, amino acids lysine and proline. What I already knew is that vitamin C is essential in the formation of collagen, which is what holds cells together in the body and this is how the body can use its own cells to essentially “wall off” a tumor so it doesn’t spread. Cancer cells create enzymes however that can eat away at the collagen. This is where the other micronutrients I listed come in, and counteract those enzymes so the collagen remains intact. What was new to me was how this combination of micronutrients actually goes to the DNA of a cancer cell and as he put it in layman’s terms, gives the cell two options: either you function properly, or commit suicide (apoptosis). Dr. Rath noted you’d be looking for a long time if you were to try to find an artificial chemical that functioned the way this combination of micronutrients does.

I was wondering when they were going to get around to covering Dr. Burzynski! If you haven’t already seen it, do yourself a favor and watch the riveting documentary (you can find it in our documentary section and it’s free to watch) on this iconic cancer doctor. All the way back in the 70’s, Dr. Burzynski discovered that a certain group of peptides, which he named antineoplastons, were almost without exception severely lacking in the blood of cancer patients. These peptides help in the communication of cells as well as in directly halting cancer cell growth. Common sense would dictate that everyone with cancer doesn’t have these peptides (a peptide by the way is a short chain of amino acids, whereas a protein is a long chain) and all healthy people do, then maybe putting them back into the body of someone with cancer might help. So that’s what he did, and it did. In his office, he pointed to pictures of various weddings he’s attended of people who he cured as small children (deemed “terminal” by the conventional establishment) all the way back then. He’s been persecuted for it ever since.

In 1983, he applied for a new drug permit, and has been facing fierce legal battles that have included numerous attempts to strip him of his medical license and even put him in jail. Dr. Gaston Cornu-Labat told the story of his involvement in one of the early attempts to get these antineoplastons licensed. For regulatory reasons, Dr. Burzynski was not allowed to run clinical trials himself, so Dr. Cornu-Labat was brought in to do it. The FDA was only sending them extreme cases of advanced cancers to participate in the trial. A child with a particular type of brain tumor that had never been shown to respond at all to any form of conventional treatment, ever, was one of those cases. Burzynski, on the other hand, already had recorded evidence of great success using antineoplastons. But then instead of allowing the treatment to take place, the FDA delayed it for months with bureaucratic technicalities, until the kid finally DIED… Their reasoning, was that somehow the risks of the treatment outweighed the benefits. A similar story is featured in the movie Cut, Poison, Burn, another great documentary which you can also find in our documentary section.

Occasionally, Dr. Burzynski is able to still get people into his trials. And again, his treatment has shown tremendous effectiveness in many, many extreme cases of childhood cancer in particular. The first call we made was to the Burzynski clinic to apply, but unfortunately, thanks to the FDA, Ryder was not a candidate. If you’re a cancer parent and reading this, please, make the next thing you do applying to the clinic. You can sort out the details and if it’s right for you and all that later, but you need to know if it is an option available to you.

I love this quote from Sir Albert Howard, the godfather of modern scientific aerobic composting, that Joel Salatin of Polyface Farms referenced in his interview: “When we feed the soil with artificials (chemical fertilizer), it creates artificial plants, which make artificial animals, which make artificial people, who can only be kept alive, with artificials (chemical drugs).” That about says it all, what we put into our bodies, and our kids bodies, send signals to tell the body how to act. These signals can be very good, or very bad, and it’s our choice which ones to send.

Dr. Patrick Vickers of the Gerson Clinic spent a lot of time on the Gerson Therapy (ANOTHER documentary everyone needs to see on this therapy is called Dying to have Known, again, found in our documentary section). It’s one of the most storied and enduring natural cancer treatments of all time. Nobel Peace Prize winner Albert Schweitzer called Dr. Max Gerson, the creator of the Gerson Therapy, “the greatest medical genius of all time.” Juicing (a whole lot of) fresh organic fruits and vegetables with an emphasis on carrot apple juice is the centerpiece of this protocol. In essence, flooding the body with the right signals. This was also one of the main components of our protocol, and as Ryder was barely one when we got the diagnosis, we knew the only way we were going to get enough juice into him to be effective was with a feeding tube. As we say in “The Six Things We Did First” document you can get entering your email address on our homepage, using an NG feeding tube (the kind that just goes in through the nose as opposed to surgically implanting one in the stomach) is THE MOST important thing we did in treating Ryder’s cancer naturally and is a must in childhood cancer and for any adult that has a difficulty eating.

Also briefly, I think it was Dr. Mercola that pointed out that high ratios of omega 6 fats compared to omega 3 is literal fuel for cancer. What does this mean for practical purposes? Avoid commercial vegetable oils at all costs!!! They’re more than likely to be GMO as well. The only oils low in omega 6 are coconut oil, flax oil, palm oil and olive oil. Don’t use olive oil or flax oil for cooking though as their not as stable and can’t take the heat, which will produce carcinogens.

As Dr. Patrick Quillin put it, “hemp / cannabis is arguably the most useful plant on earth.” He went on to note that the word “canvas” comes from the word cannabis because it’s what our ancestors used to make all of their clothing and the canvas that covered their wagons. It lasts longer than cotton or polyester, and “coincidentally” when DuPont got its patent for polyester in 1937, the witch hunt for cannabis began. It can be used to make paper (the constitution was originally drafted on hemp paper). You can eat it, it’s high in protein and omega 3s. And yes, the cannabinoids, mainly CBD and THC, found in cannabis are being found to be of diverse and profound medical benefit.

He went on to tell the story of how the DEA approached a major researcher at UCLA, Dr. Donald Tashkin, and asked him to do a study to show that smoking marijuana causes lung cancer so they could “prove” how bad smoking marijuana is for health. Dr. Tashkin didn’t think it would be hard to prove, went out and did a huge randomized trial study, and came back with the results that not only does smoking marijuana NOT cause lung cancer, it actually helps to prevent it!!! OOPS!! Now as Dr. Quillin is sure to note, he’s not saying everyone should run out and start smoking marijuana, but he is saying that it’s time to have a rational conversation about it because the data keeps flooding in showing that it is non-toxic and has overwhelming therapeutic benefits.

I won’t go too deep into it because it honestly would take too long and deserves its own article, but Dr. Robert Scott Bell sat there for minutes on end rattling off study after study showing these cannabinoids effect on controlling and reversing just about every type of cancer you can think of, even glioma brain cancer which hardly anything works on! You could probably spend an entire week doing nothing all day but watching YouTube cannabis cancer testimonials (there are plenty specifically about children as well) and you still wouldn’t have seen them all. While I’m on that note, one more must watch movie on our documentary page on this cannabis and cancer is called “Run From The Cure.”

As he and Dr. Robert Scott Bell point out, it goes even deeper. Turns out our bodies have what is called an endo-cannabinoid system which consists of actual cannabinoid receptors almost everywhere in the body! So, cannabis and hemp have a wide range of practical commercial applications, we have cannabinoid receptors in the body, and the cannabinoids are being shown to have immense therapeutic benefit. Does it sound like God did or did not put this plant here to be used?

One more thing, as I’ve mentioned before, in evaluating alternative cancer treatments for children, ease of application has to be very high on the list of factors to consider. The only way a treatment is going to work is if it’s used the way it’s supposed to be, which means regularly. If you’re only able to get something in here and there because it’s one of those things that’s hard to get a child to do for whatever reason (again, not related to this topic but I must take the chance to advocate for a feeding tube one more time), it’s not going to work. Treatment with cannabis oil consists of a tiny drop in the mouth a few times a day. That’s it. If you’re living in a state where it’s legal, it’s worth some serious consideration. And if you’re not and nothing else is working, maybe moving is worthy of your consideration as well.

Alright, I’ll get off the soap box now, as you can probably tell that episode got me fired up! Can’t wait to see what’s in store for the finale tonight!