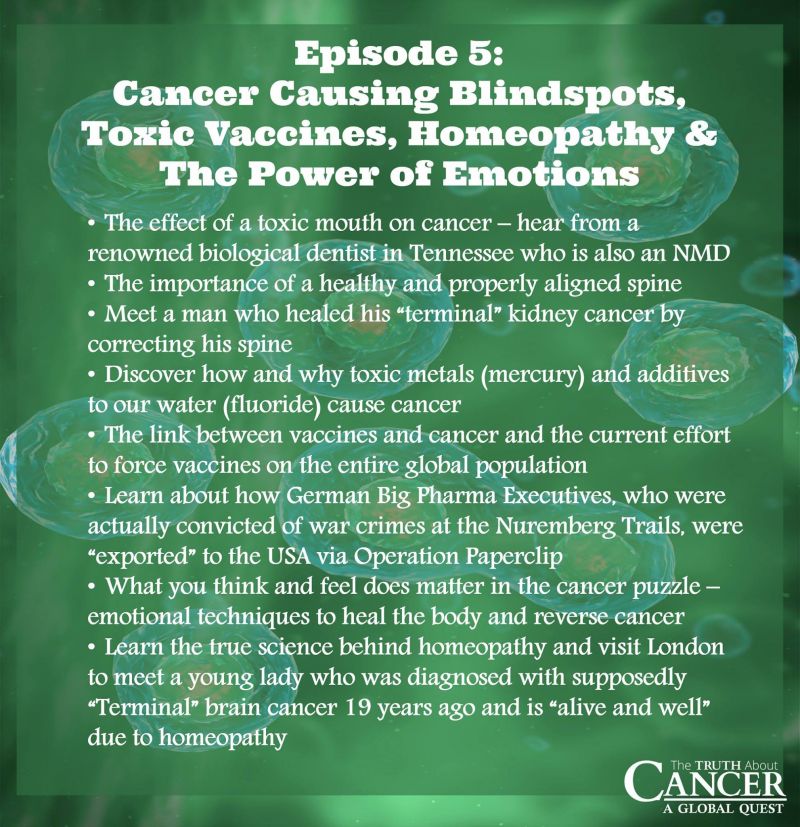 The Truth About Cancer: A Global Quest, Recap Episode 5

As Dr. Keith Scott Mumby says in his book Cancer Research Secrets, and I believe on the last installment of this series, “Every good health measure is an anti-cancer measure.” I couldn’t agree more and I was glad to see Ty cover these topics that often get left out of the discussion of fighting and preventing cancer.

We’ve known for a while now how important the spine is to the health of the body and that misalignment can lead to a variety of problems and even diseases. Ryder had his first adjustment when he was just a few weeks old! No, we weren’t taking him to the chiropractor every week as an infant or anything like that, but if you’ve ever been involved in a birth, you know it’s usually not exactly the smoothest process. Given the fact that infants are pretty “bendy,” it’s a good idea to make sure that if something gets a little bent out of shape on their way into the world, that it gets corrected early on.

What I hadn’t really considered though, is that a poorly aligned spine can could actually lead to cancer. Dr. Terry Harmon explained that while most people think of the immune system as the most important system in the body for fighting and fending off cancer, which he agreed with, the immune system is made up of a series of glands and organs such as the thymus, spleen, bone marrow, and the gut, which are all controlled by the nerve system. As we know, the nerve system relies on a straight spine to communicate properly with the rest of the body, so if we have an area that’s bent and pinching off nerves the effects of that can be a lot worse than people might think. This issue is especially important to us and should be to our fellow neuroblastoma parents as this is a cancer of the nervous system!

This next one likely won’t apply to many childhood cancers but it’s important to be aware of so your kids don’t get hit by this blind spot as they grow older, and it’s certainly something many of you reading this will need to address for yourself! It turns out that a lot of dental work can actually be a direct cause of cancer. Bill Henderson explained that each spot in our jaw is actually connected to an organ in our bodies. In the case of removed or root canal filled teeth, more often than not the infection that caused the need for the procedure in the first place is not cleaned up properly, and after either the removal or the root canal it is effectively sealed in the jaw and left to grow. Over time, this ends up spreading to the area in the body linked to that particular spot in the jaw and causing havoc. There was actually a conclusive study done in the 20’s that proved there’s basically no such thing as a safe root canal, yet they continue to do them the exact same as they did back then almost 100 years ago.

The other toxic dental procedure is a silver filling. It might be all well and good if it were pure silver they’re putting in there, but it’s actually only about 40% silver. The rest is comprised of copper, tin, and mercury!! Mercury is incredibly toxic to everything in the human body it touches. They claim that it doesn’t off gas, but, it does. This ends up being a steady toxic stream to the organs.

The answer to all of these issues is what is known as a biological dentist. A dentist that is aware of these problems and treats his or her patients accordingly. They’re still fairly rare, but just searching the term “biological dentist” and the state you live would be a good place to start. Bill Henderson also keeps a list of every biological dentist across the country he recommends that he’s happy to give out if you email him asking for it.

Lastly, I’m very, very glad they went over fluoride. I won’t spend too much time explaining all the ways that it’s terrible for human health because there are so many of them (you can learn all about it at Fluoride Action Network), but I could just boil it down and say it causes cancer and brain damage. The Nazis (yes, THE Nazis) put it in the water supply of the ghettos and concentration camps to make their prisoners more docile. You don’t want to drink it. You don’t want your kids to drink it. Period. If you’re living in an area that fluoridates the water supply, don’t drink another drop. It will be better for you in the long run to go thirsty until you can get it out of your water. The simplest way to do this is with a high quality gravity fed water filter (not the kind you get at a big box store for $30). When we did the research, we settled on ProPur using the ProOne G2.0 filter, which has fluoride removal included. Any filter of this caliber will cost you a couple hundred bucks initially, but once you start learning about everything that’s in public water it’s more than worth it, and costs pennies a gallon which is nothing compared to buying bottled water.

By the way, fluoride intake leads to an iodine deficiency, and iodine deficiency on its own is a cause of cancer, another topic Dr. Edward Group and others spent a lot of time on. Conversely, iodine supplementation can push fluoride back out of the body. We use a nascent iodine supplement from Global Healing Center (coincidentally run by Dr. Group) called Detoxadine. It’s super easy, just a drop on his tongue (or a few for us) every day does the trick.

Two quotes I absolutely loved from this segment:

“I think that people have to look at vaccines from the ground up. I mean, let’s take away all of the propaganda and so forth. You’ve got a needle, you’re injecting it into babies, into adults even, into children of all ages. What’s in the syringe? You’ve got many different chemicals, some of which are obviously carcinogenic, like formaldehyde for example. You’ve got aluminum which is extremely toxic. You’ve got other heavy metals. You’ve got unknown elements, in vaccines. Germs that were not intended to be there, that are there. Partial genetic sequences of things that were either put there on purpose, or not. And it’s all right there in the syringe, and these toxic chemicals and these germs and the whole soup. You’re basically saying to a mother, ‘look this is what we want to do to your baby, OK? We’re going to take this needle with the syringe full of this stuff I just explained and we want to shoot it into your baby, who doesn’t really have any immune system at all, except derived from you, the mother, and, uh, this’ll be a good thing’” Jon Rappoport.

“Many vaccines if you just read the inserts will say things like, the HPV vaccine for example says that ‘upon receiving this injection, you may lose consciousness, pass out, and fall down and hurt yourself,’ and this is just considered normal! ‘You may have seizures, you may have a fever, you may have to go to the emergency room,’ this is all listed on the vaccine inserts and somehow, the American public has been brainwashed into thinking that this is normal, healthy medicine. It isn’t! If someone gives you a shot of something and you pass out, how is that not causing a neurological side effect that could damage your brain?” Mike Adams.

Mike also pointed out there was a town in Mexico recently where 75% of the children who received a particular vaccine either ended up hospitalized or dead.

Several people also made mention of the US vaccine court, which is a system the government set up to protect the vaccine companies from liability to pay off victims of vaccine damage from a pool generated from a tax on every vaccine. Basically, if you can PROVE IN COURT your child was damaged by a vaccine, they pay you some money to shut you up and the drug companies get to stay out of the whole thing. This court has paid out OVER THREE BILLION DOLLARS since 1989.

The Power of Emotions

Yes, it sounds a little woo-woo, but more and more hard science is coming out that emotions can have a direct effect on physical health, and “emotional traumas” can even cause cancer if left unresolved. I didn’t think much of this the first few times I heard about it, but after hearing so many interviews of credible people who have looked into this and all came to the same conclusion, I believe it to be an important thing to take note of. How this applies to your kid with cancer – give them the best life you can. If you haven’t read it already, my article Live for Today, Fight for Tomorrow is a good place to start.

Alright, to be honest I didn’t get this write-up done this morning before everyone got up as I’d hoped, the next episode is starting soon, Ryder’s furious that he hasn’t had his dinner yet, and I don’t know enough about homeopathy to write extemporaneously about it… After seeing last night’s episode though it has most certainly risen up on my list of things to look into! In the meantime, Dr. Keith Scott Mumby was one of the main interviews on the subject, so here’s an article he wrote on what it is and why it works!

If you have anything to add about homeopathy or anything else covered here, I’d love to hear about it in the comments. Other than that I’ll be back tomorrow for the next one, see you then!