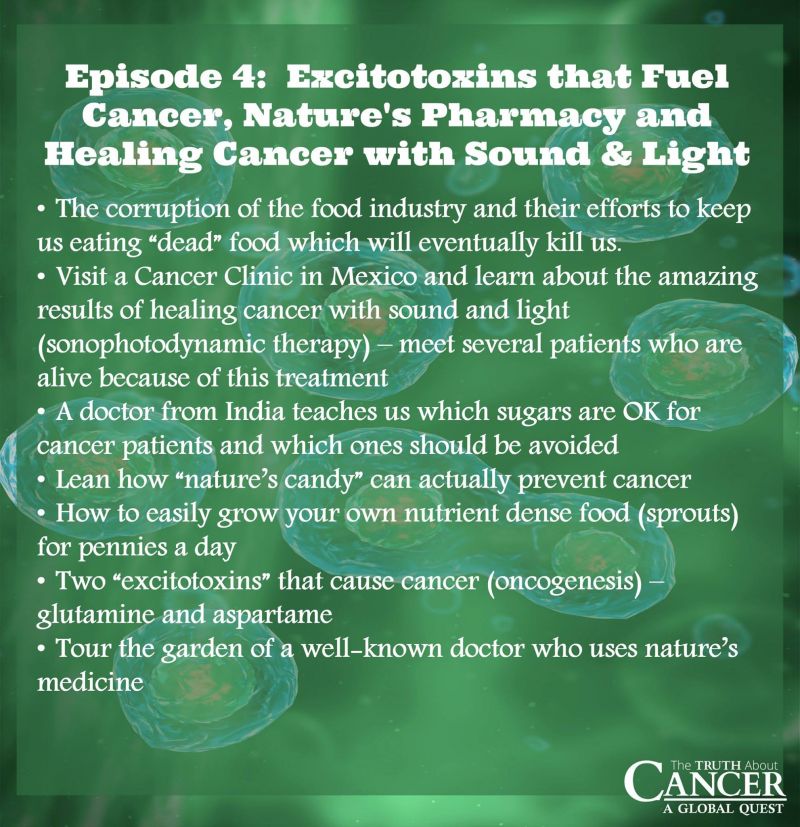 The Truth About Cancer: A Global Quest, Recap Episode 4

Ty started off last night’s episode letting us know about another area in which our guard needs to be up to protect ourselves and our children from another major cause of new cancer and fuel for existing cancer in society today. It’s back to food, which really is the foundation for all health. It was pointed out that while in this movement we spend a lot of time pointing our fingers at big pharma and the medical industry for not providing and even suppressing the true ways of healing from disease, we also need to hold the food industry accountable for driving us into the arms of that system in the first place.

Ty made the point that just as within the highest levels of big pharma, the policies and practices of the food industry are guided entirely by money. The well-being of its customers does not factor anywhere into the equation. I would add that government protection of these big businesses and suppression of alternatives is the only way this system remains standing. If true competition were allowed in America and more consumers were exposed to better information in guiding their decisions, it would all fall apart virtually overnight.

Ocean Robbins of The Food Revolution Network noted that at the yearly conferences of The Academy of Nutrition and Dietetics, the world’s largest organization of food and nutrition professionals, probably the one your hospital’s “nutritionist” (if you’re lucky enough to even have one) is a proud member of, are sponsored by companies like McDonalds and Coca Cola…… Lunacy. So I would venture to guess at those meetings these dieticians and nutritionists are certainly not being told anything about steering their clients away from toxins, excitotoxins to be exact, in the food they’re likely to eat every day if they’re not careful.

Excitoxins such as glutamate and aspartame, in short, are put into food to trick our brains into thinking that food tastes better than it really does, and wanting more of it. I’ve heard Dr. Russell Blaylock talk about the dangers of these toxins for years, mainly to the brain as it was thought that was where all the glutamate receptors are, but in last night’s episode he revealed that new research is showing they’re even worse than anyone thought. It turns out that every cell in the body has glutamate receptors, and that study after study on cancer after cancer showed higher levels of glutamate were directly linked to more aggressive cancers. What this means in practical terms, is that fuel for the cancer is added to every one of your kid’s happy meals. Still believe your oncologist when he tells you it basically doesn’t matter what your kid eats?

Blaylock made it known that it’s not enough just to watch out for MSG (monosodium glutamate) anymore, because ever since people started wising up to the fact this stuff was probably not worth the taste, they’ve managed to still hide the glutamate in foods under other names such as hydrolyzed whey protein isolate, hydrolyzed soy protein isolate, calcium caseinate, yeast extract, the list goes on. Here’s a good article that goes into depth on this topic and has a list at the bottom of terms to watch out for. Just like I mentioned yesterday in the Episode 3 Recap concerning avoiding GMOs and pesticides however, the easiest and healthiest way to avoid these things is by just eating real, whole, organic foods. This is really a whole lot easier to accomplish than you might think, you just have to start trying to do it!

For the sake of brevity I’ll just mention that aspartame is another excitoxin that should be avoided at all costs for similar health reasons. As we know it’s an artificial sweeter that’s put into sweets in place of sugar usually for the stated goal of weight loss, but to add insult to injury lately all these pesky studies have been showing it actually is worse for obesity than sugar!! And no, Pepsi didn’t do anyone any favors by removing aspartame in favor of sucralose. It along with erythritol, isomalt, maltitol, saccharin, and the rest of them are just as bad for their own various reasons. Again, here’s a list of names to watch out for, but also again, just eat and feed your kids real foods…

Similarly to yesterday’s segment on eating the rainbow, Dr. Patrick Quillin took Ty around the 60 plus fruit trees in his back yard explaining the various health and anti-cancer benefits of each one. He also pointed out that you don’t need several acres to do this… Who needs a lawn and landscaping bushes when you could be planting and watering things that will give you food to eat? This is a concept we’ve known for a long time and are slowly starting to take action on. We’re currently renting so we can’t necessarily rip up the yard and plant a big ol’ garden, but there’s still a lot you can do with various planters inside and out. Just the other day the main ingredient in Ryder’s daily smoothie was our own homegrown chard out of our Mini-Farm Grow Box from foodrising.org, couldn’t have been easier to grow and it’s sure going to cut down on the grocery bills once all of our plants fully mature!

One area I’m really glad they spent a good deal of time on was the subject of sugars in fruits. Whenever the topic of cancer feeding on sugar and avoiding it comes up, the first question most people (us included) ask is, “well what about fruit?” You’ll get a lot of different answers to this question, not many very satisfactory or confidently given. In the last series, The Quest for the Cures Continues, Dr. Jimenez went over his reasoning that normal human cells absorb left spinning molecules, while cancer cells absorb right spinning molecules, and it just so happens that natural organic fruits and vegetables produce the left spinning molecules and processed sugars and GMOs the right ones. While I didn’t know anything about left and right spinning molecules, it was the most compelling explanation I’d heard to date. I was curious if they were going to elaborate anymore, but instead Ty and his guests covered a different, and I would say complementary explanation, that sugar on its own is a bad thing, but sugar together with the whole food it is found in, is perfectly fine. When the sugar is digested along with the fiber and the rest of the matrix of the whole fruit, it is not absorbed as rapidly and the healthy cells can get to it before the cancer.

This explanation makes a lot of sense, but left Teddy and I with the lingering question, what about juicing? The Gerson Therapy is one of the most successful and cherished natural cancer therapies out there that has stood the test of time, and its main component is carrot / apple juice. Both high glycemic foods whose fibers are removed in the process of juicing… If you need the fiber to balance out the sugars, wouldn’t The Gerson Therapy be just another way to inflame cancer rather than curing it year after year? It was pretty late when we watched this one and we were both consequently a little loopy so maybe we missed it but to the best of my recollection this wasn’t brought up. Now that I think about it though, I believe when she was talking about juicing in episode 3, Cherie Calbom The Juice Lady mentioned that in juicing the insoluble fiber is removed, but the soluble fiber is retained. This could be the answer. If anyone has anything to add to this PLEASE let me know in the comments.

If there was one thing this segment confirmed, it’s that the same chemo they’ve been using since the 70’s in many cases is most certainly not the latest and greatest in cancer fighting technology. Think about that for a second, it’s almost 2016 and we’re still being offered the same old crap that was invented in the 40’s from mustard gas? Really?

Sono photo dynamic therapy, localized hyperthermia, systemic hyperthermia, pulsed electromagnetic field therapy…. When’s the last time you heard your oncologist say you should be giving any of these a try? They’re all standard practice at The Hope 4 Cancer Institute run by Dr. Jimenez, and we heard from plenty of satisfied (cured) patients of his last night. I believe it was Dr. Ben Johnson last night that said something to the effect of “there’s so many ways to go about curing cancer now, it’s laughable” that all they’re offering in the hospitals still is the big three.

Bottom line is, get out there and do your own research! It can certainly be overwhelming at first but also very inspiring when you realize just how many things there are to try that have already worked for thousands of people. Especially in researching to save my own son, I take a lot of comfort in the fact that if for whatever reason our current protocol stopped working, I could go back to the drawing board and within a couple days implement a whole new set of proven therapies.

That’s all for today. Again, if you haven’t already, do yourself a favor and buy Ty’s book. Even if you, or your kid, or someone else you care about isn’t fighting cancer right now, with rates almost as high as one in two these days, it’s a good idea to be prepared and more importantly do everything you can to prevent it.

There’s still a little bit of time to catch episode 4 today before they move on to episode 5! I can’t think of many day to day things that would be more important than arming yourself with this information, so if you missed it, go get watching. Enjoy!