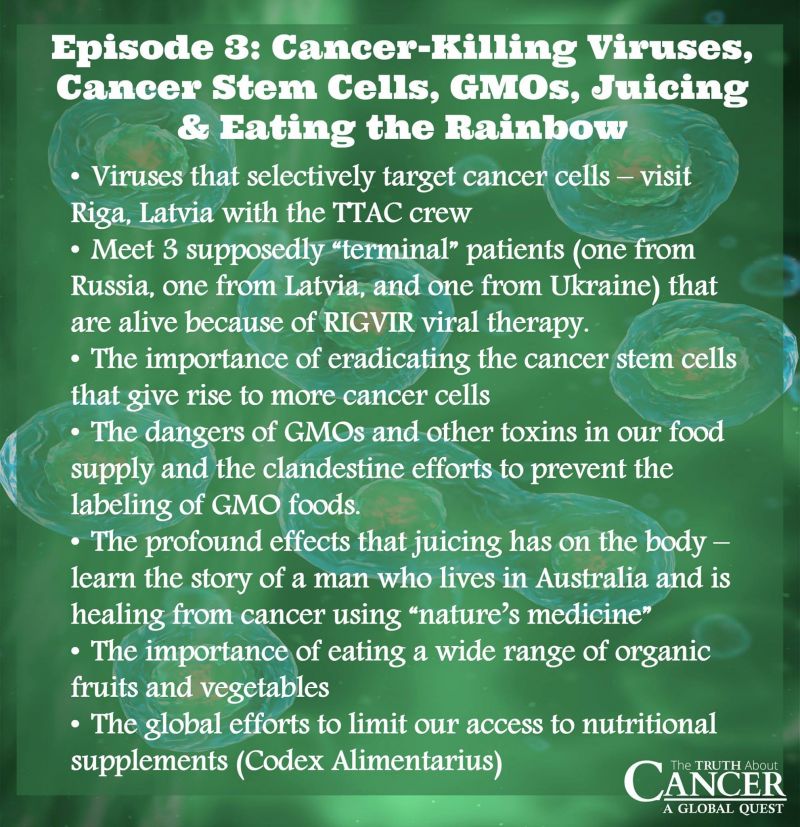 The Truth About Cancer: A Global Quest, Recap Episode 3

Yet another great episode!! Ty started off discussing with Dr. Russell Blaylock and others what we think may be the single most important thing to realize about cancer that does not get discussed AT ALL in conventional settings. Within the population of cancer cells in someone afflicted with the disease there are actually two main subgroups, cancer stem cells and daughter cells. The stem cells are the ones that start out as regular cells and then for various reasons turn into cancer cells. When they begin dividing uncontrollably, the cells that get produced are the daughter cells. It turns out that chemotherapy and radiation only kill the daughter cells, and do nothing to the stem cells. If anything, oftentimes the stem cells will actually be enhanced by these therapies. That is why the cliché term “we got it all” used by oncologists is usually incorrect as they may have killed most of the daughter cells and shrunk the tumor, but the cancer stem cells are left to start anew.

That being said, there are plenty of natural substances (go figure) that do target cancer stem cells! Resveratrol, curcumin from turmeric, EGCG in green tea, and quercetin all have been shown to target cancer stem cells. Recently, Ryder’s been getting all of these in liposomal form from taking LifeOne with every meal. Elagic acid, primarily found in berries is another great substance for targeting stem cells, so Ryder gets a big helping of Berry Power from Synergy Company mixed into all of his food. A supplement we feel deserves a whole lot more attention is called Haelan, which is derived from fermented soy beans (note: don’t eat unfermented soy products!). Ryder was on it from day one. Like I mentioned with vitamin C a few articles back, it’s one of those substances that does just about everything you’d want a cancer fighting supplement to do, including targeting cancer stem cells! What I really like about it is unlike a lot of formulations that while they may indeed be incredibly effective, for the most part only have tradition and testimonial to back them up, Haelan has been rigorously studied. We spent hours going through the studies when we were first considering it for Ryder and were very impressed. Lastly, a component in ginger called 6-shogaol is another well studied substance for targeting cancer stem cells. It actually looks like another study just came out on the subject in breast cancer stem cells recently. So it goes without saying that Ryder gets a whole lot of fresh ginger in his juices!

Juicing and Eating the Rainbow

Which leads us to juicing. Mike Adams, The Health Ranger (follow Natural News if you don’t already) spent a lot of time really hammering in the concept that just about every vegetable and fruit has at least one cancer fighting component to it. In fact, I think it’s safe to say you’d actually be pretty hard pressed to find one that did nothing to fight cancer at all! The term “eating the rainbow” is a good one to keep in mind while at the grocery store or famers market, try everything! Cherie Calbom, The Juice Lady emphasized this fact and that juice is the best way to distill down all of these cancer fighting nutrients into mega doses in one glass that would be impossible to get from attempting to eat that amount of vegetables. While whole vegetables, and even green smoothies (which Ryder is OBSESSED with lately by the way) are great for general health, getting all of those nutrients in a concentrated liquid form is the best way for our bodies to absorb and use them completely and rapidly.

Speaking of healthy eating, another topic we were glad to see Ty spend a lot of time on with Dr. Mercola and Dr. Robert Scott Bell was GMOs and their unspeakably detrimental effect on the human population. When you take a step back and think about what GMOs are and how they function, it’s nothing short of insanity that we’re feeding these things to our kids (well, we don’t in our family that’s for sure…). I wrote an article in Cancer Crackdown a while back on this subject, which come to think of it we should probably repost that up on here. The gist of it is that crops are genetically modified to serve three main functions:

The problem with this last one is once you or your kids eat them, who knows what genes these things are running around turning on and off inside your bodies? The best way to avoid these nifty little traits by the way? Eat real, whole, organic food!!

Lastly, Dr. Antonio Jimenez touched on what he and others have been doing for some time now and what many consider to be the next generation of cancer treatments – using viruses to fight cancer. This sounds like something conventional medicine would dream up, and on that note many mainstream scientists are working on this exact concept, the difference is that Rigvir, the virus Dr. Jimenez has been using is NOT genetically modified. True to form, conventional medicine is trying to come up with a genetically modified virus for this purpose they can patent and make billions of dollars on like the rest of their drugs. Rigvir has been proven to both infect and kill cancer cells while leaving healthy cells alone entirely. Moreover, once a Rigvir cell has mounted onto a cancer cell, the immune system is alerted to the cancer cells’ presence (if you’re not doing something to help your immune system recognize cancer, it can go undetected in the body) and will mount an attack for a double whammy. Pretty cool stuff!

I’ve only scratched the surface of what was covered so there’s still time to catch episode 3 if you missed it. Or, if you’re reading this in the future, sign up to be notified of replays or purchase the DVDs.