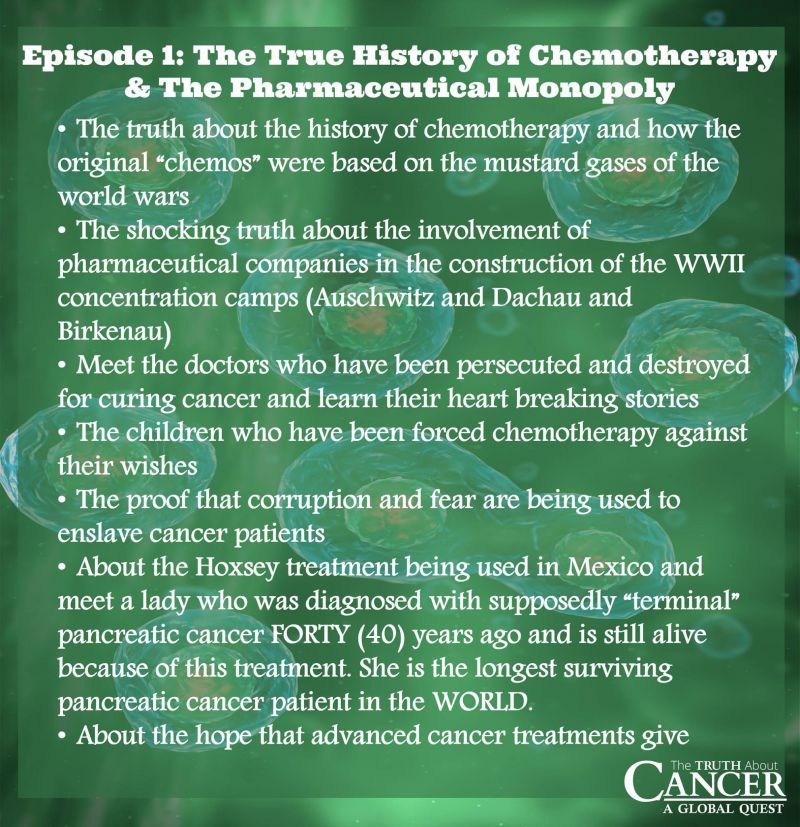 The Truth About Cancer: A Global Quest, Recap Episode 1

The True History of Chemotherapy and The Pharmaceutical Monopoly

If you don’t already know about Ty Bollinger, The Quest for the Cures Docuseries, and the book, Cancer: Step Outside the Box, the next series of articles and their subject matter are sure to change your life. As I’ve said before, we don’t think it was an accident by any means that we got pointed in some very good directions very early on in finding out Ryder had cancer. This was one of them. As soon as Ryder was diagnosed (actually even a little before when we had a feeling something was wrong) we immediately started researching alternative cancer treatments.

It didn’t take long to find out that an online docuseries put together by Ty Bollinger called The Quest for the Cures was coincidentally set to air within a few weeks of the diagnosis! When it finally aired, we watched every episode, pen and paper in hand. I took notes on every treatment that sounded like something we could do with an infant, and every featured doctor and researcher whose work I wanted to follow. This series put us light years ahead of where we would have been without it.

Immediately afterwards, we bought Ty’s book, Cancer: Step Outside the Box. The book is very thorough in covering a wide range of information but at the same time really helped us understand how to prioritize treatments.

Later on, The Quest for the Cures Continues was released, featuring even more interviews and treatments. Now, the day we’ve been very excited to come for a long time is finally here, the next installment in the series, The Truth About Cancer: A Global Quest has begun!

For those who missed it, Part 1 was all about exposing the truth about the origins of big pharma and what goes on in the present day cancer industry together with chemotherapy and radiation. Ty covered the fact that the drug intensive medical system today is not the way it is because chemical drugs are the best, but because back in the early 1900’s the Carnegie and Rockefeller Foundations went on a campaign of simultaneously showering the drug focused medical schools with hundreds of millions of dollars (with the condition they ONLY teach about drugs from then on out) and smearing every other type of school such as homeopathy, naturopathy, chiropractic, etc. until they had created a monopoly on the medical system. Even today, the American Medical Association was found guilty in federal court of conspiracy to destroy what’s left of the chiropractic profession.

The sad truth that some of the same drug companies of today were directly responsible for the formation of the largest concentration camps in Nazi Germany to use the prisoners as slave labor and test subjects was also brought to light.

Speaking of that time period, Ty also went over the fact that chemotherapy was originally discovered as a derivative of mustard gas!

We learned about a very scary reality of some doctors even fooling people into thinking they had cancer when they really didn’t. Last year, Dr. Farid Fata was arrested and sentenced to 40 years in prison for this horrific crime.

And of course, they covered a subject very close to home for us, the fact that if parents today have a different idea of what’s best for their kids than a cousin of mustard gas, CPS will be called and their children potentially taken. It’s hard to think about these things sometimes but it’s also necessary to know the reality so we can start to learn what’s really best for our kids.

But it wasn’t all doom and gloom. There were some INCREDIBLE testimonials of healing without using toxic treatments including one woman who is a 40+ year survivor of pancreatic cancer…one of the deadliest cancers out there!

If you missed it, make sure enter your email address in the link below so you are notified when Ty airs this again and also when the whole docuseries is made available for purchase.

The Truth About Cancer: A Global Quest

Go here for The Truth About Cancer Episode Two Recap