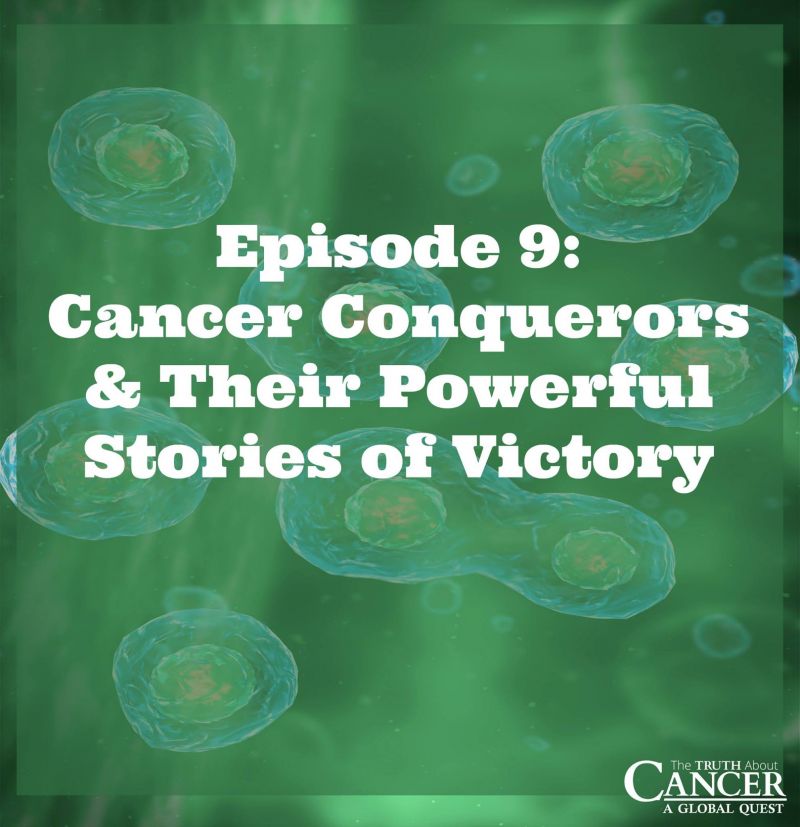 The Truth About Cancer: A Global Quest, Episode 9 (The Finale!) Recap

I definitely thought the last couple episodes were the best in the sense of the treatments covered, epigenetic processes within the body explained, etc. But a case could definitely be made that the finale, episode 9 was the most important. You can hear all day from the various celebrated and very well qualified doctors and researchers explain the various alternative therapies and the science and tradition to back them up, but there’s something about hearing from the people who have actually used these methods, and in most of the cases highlighted last night ONLY these methods, and are alive and well years after their diagnosis to tell about it.

If you’re still on the fence about whether “alternative” (I really don’t like that description because in my humble opinion, in a rational society, effective, natural treatments that make us healthier should be what we all want to try first and POISONING ourselves should be the alternative) treatments are going to be something that’s worth your time and effort, you really owe it to yourself to spend a lot of time going through individual testimonials. This is what is going to make it all real for you, and more than anything else you need to believe that this stuff is going to work. The stories of others who have been there before us, like Leanne Woodland for instance, is what gave us the strength to go to the lengths necessary to give each of the treatments we chose for Ryder the dedication and perseverance they deserved to bring him back to health, the strength to stay the course despite all the non-believing doctors, friends and family members, and ultimately move states in search of more of a say in our own son’s care and choose to stop conventional treatment halfway through the “standard of care” when we got it.

As I mentioned in the episode 8 recap about cannabis oil, it’s one thing to hear here and there about how there’s a lot of science coming out about its therapeutic benefit, but it’s another to do a YouTube search on something like cannabis cancer testimonials and be presented with thousands of results, most of them of real live everyday people you can hear from on how they either used cannabis and nothing else and cured their cancer, cannabis as the centerpiece of their all natural protocol and cured their cancer, or cannabis in conjunction with conventional treatment and as a result had far fewer negative side effects while curing their cancer much faster than they would have without it. You can also find thousands of these types of testimonials on The Gerson Therapy, or just by searching natural cancer treatment testimonial. It’s kind of the same as my view on the thousands upon thousands of people who claim to have seen a ghost, an angel, a spirit of some kind, had some sort of meaningful contact with a deceased loved one, etc. I can believe that a certain percentage of them are only looking for attention, or misinterpreted a physical event, or are just plain crazy… But every single one of them?

There were two common themes in all of the testimonials which were, strangely enough, all of these people were more or less glad that this had happened to them (now that they’re on the other side of it of course). They were all beaming talking about their journey through beating cancer naturally and how they now lead healthier, more fulfilling lives than they did before they were diagnosed with cancer. We’re no different, although Ryder wasn’t old enough to be making his own life choices at one year old when he was diagnosed, the way he will be raised now is markedly better than what it would have been had we continued on the path we were on. That being said it wasn’t a bad path by any means, but Teddy and I are constantly being reminded of the fact that our lives are so much more healthy, happy, and fulfilling now than they used to be. The second is that they every one of them went all out. We see all the time people trying this or that here and there, and then claiming that “the natural stuff just doesn’t work for me”. Not these people. They all went to great lengths to carry out the protocols they either designed themselves or were given by one of the cancer doctors featured on the show. I wrote an article on our views how we look at fighting cancer in this light called Live For Today, Fight For Tomorrow a while back.

There were so many incredible testimonials in episode 9 I really can’t even begin to do them all justice in a short article, but I will mention a couple things I liked from a few of them.

We heard from our good personal friend, Jared “Kid Against Chemo” Bucey. We became friends with Jared and his mom Lisa online early on in our battle against childhood cancer and still marvel at some of the similarities between him and Ryder. They both LOVE Michael Jackson (15 seconds to brighten your day – this video of Ryder dancing to Billy Jean), they were both born with major heart conditions on top of having cancer (Jared actually had a heart transplant shortly after he was born), and our families have both had scares with CPS. Jared had one round of chemo and definitely experienced the extreme end of its negative effects. He was debilitated, unable to even really control his hands, in intense, whole body pain, had mouth sores that led down through his GI tract, the list goes on. He knew in his heart that another round would kill him, so he said he was done, and stuck to the decision even after the doctors described the slow agonizing death he surely faced without their treatment (kind of ironic given the experience I just described). Lisa quit her job to research natural treatments for Jared full time. They ended up implementing a lot of the stuff we’ve heard about in these episodes, and that we’ve done for Ryder: diet change, juicing, various supplements, infrared saunas, etc. Jared celebrated passing the day that his doctors told him he would undoubtedly be dead by several months ago, and more importantly shows no sign of cancer today.

The story of how Jordan Rubin cured himself from testicular cancer. Jordan had already been through one journey back to health in his life already. In college he came down with multiple severe health conditions virtually all at the same time, and was able to turn his health around basically by only changing his diet, in this case based on biblical principles. That led him to write a book called The Maker’s Diet (has been on my list to read for some time now) and start a very successful nutritional supplement company. A short time later, he was diagnosed with cancer. It turned out he had an undescended testicle at birth that was never addressed, which he and his parents apparently didn’t know causes a drastically increased risk for testicular cancer.

The doctor that diagnosed Jordan knew what he was all about, and when Jordan told the doctor he was not planning on going the conventional route, the doctor said something to the effect of “I was afraid you were going to say that, you’ll be dead within months, 100% chance.” Jordan took a leave from his post running his company and dedicated the next couple months of his life to addressing every fathomable aspect in reversing everything that could contribute to his cancer and healing himself. Jordan made a couple good points I really liked. The first, was that not only did he address the physical aspect of cancer (healing and cleansing therapies), he also spent a whole lot of time on getting his mental and spiritual affairs in order. Jordan noted that if his baseball coach when he was ten years old had yelled at him so badly that he was still holding onto it and at some level even upset by it, he would sit there and write about the issue until he was at peace with it. He also spent a considerable amount of time praying and strengthening his relationship with God. Jordan quickly overcame the disease and has been cancer free for years.

The last story I’ll mention (there were SO many more incredible stories I wish I had time to write about all of them) is that of Todd Jones and his daughter Jenay, because it hits close to the childhood cancer home. Just like us, Todd wanted to stop treatment before the hospital did, and got a nice little visit from CPS. Just like us, Todd refused to feed his daughter an ounce of hospital food, opting instead to give his daughter Living Fuel and LifeOne through a syringe (our approach was bringing a juicer and pounds of produce into the room ☺… And we were using Living Fuel too! We’ve since also added LifeOne to the mix.). And just like us, his daughter looked notably better than most other kids in the oncology ward every time they wer there.

One comment he did make on this topic that I would be remiss if I didn’t point out did sort of rattle me was the notion a sign that Jenay was doing better than the other kids was that she did not need a feeding tube. If you’ve followed us for any amount of time, you know how strongly we advocate for feeding tubes in childhood cancer. Todd was able to give Jenay Living Fuel and LifeOne directly by mouth with a syringe, (which isn’t surprising because they’re both pretty tasty!) and as we always say ease of application must be high on the list in evaluating which treatments are right for you and your child, but A FEEDING TUBE MAKES SO MANY MORE OF THESE TREATMENTS EASY. There’s absolutely no possible way we could have been giving Ryder ounce after ounce of Haelan from day one (if you’re not familiar with it, INCREDIBLY well studied and effective, but not the best tasting), ounce after ounce of fresh juice, MSM water (note: this link goes to Antonina Bureacenco’s website which has tons of great information on MSM, but if you’re in America [she’s in Canada] and want to buy her MSM product which we use, you can get it at www.sihatop.com), and the cabinet full of other supplements we were able to mix into the juice had we not had Ryder’s feeding tube. And again, we didn’t go to the lengths of having one surgically implanted into his stomach, we got by just fine with the NG tube which just goes up the nose and into the stomach. All that being said, Todd clearly did an incredible job by his daughter and is a shining example of how a cancer parent should be acting and my tangent should not be construed to indicate anything less than this, but as you can tell, we’re pretty big on feeding tubes so I couldn’t let that one go unmentioned ☺.

Again, if you haven’t already, go watch episode 9 if you’re reading this in time, buy the series either way, and hop on YouTube and watch as many testimonials as you need to know that all of this is a good thing for your kid.