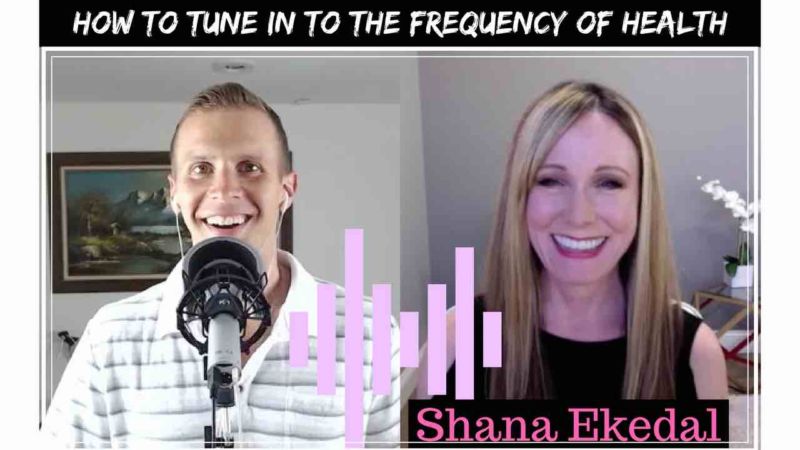 How to Achieve the Optimal Frequency of Health

Shana Ekedal tells us about the frequencies of life and how to attract health at an energetic level.

What Is Frequency and How Does It Relate to My Health?

Shana Ekedal tells us she believes that in consideration of our health and well-being energy and frequency are more often than not the least discussed yet have the greatest potential for impact. The more I think and learn about it the more I would tend to agree with her.

No one would really argue with the assertion these days that when you break all of us and the world around us down far enough, all you really get is energy. What do we do with that information? Realize that all of us have an energy field along with every other thing on the planet and those fields are influencing and even attracting or repelling one another, and act accordingly.

Shana references being in an old car with an actual radio dial. Each time you turn the dial to a new station – rock, country, jazz, pop, talk, and so on, you are tuning in to a new frequency. Both in the sense that tuned the receiver to pick up different waves, and in the feelings that the different types of music elicit.

Now, just because you can’t see those frequencies certainly doesn’t mean they’re not there. You just tuned in to them in the ways we described.

Shana also makes the example of going to a party, not knowing anyone, and being attracted to certain people more than others. You might even say you “liked their vibe.” Shana says that at the deepest level it’s because we were most attracted to their energy.

Knowing that we have an energy field, and that we can attract or repel other good and bad energies, maybe that’s something we should pay a bit more attention to and actually use to our advantage when it comes to our health.

Ekedal notes that we can develop a disturbance in our energy field before that disturbance manifests in our molecules and cells. Ideally we want to find and remove it before that time, but if we already are dealing with something physical then that’s all the more reason to locate the disturbance.

Internal Influences on Energy and Frequency

Right along with emotions are thoughts. We’ve all likely experienced something along the lines of the following scenario.

Your friend, for whatever reason, is always thinking everyone is out to steal something from them. Sure enough, they get stolen from, which reinforces and perpetuates these thoughts. Before you know it that friend gets stolen from more than anyone you’ve ever met.

Bringing it out from thoughts are our overall belief systems that we may or may not even realize we have. Shana makes the reference that if someone calls you fat at an early age and for whatever reason that gets ingrained in you that “I am fat,” it doesn’t matter how many or what type of diet or nutritional strategies you follow. Until you clear that belief system you will not be able to keep weight off.

For the purposes of healing cancer, in this light then is the phrase “I have cancer” really doing us any favors? Is it merely a statement or could it actually be doing us harm to be repeating all the time?

External Influences on Energy and Frequency

Outside of emotions, thoughts and belief systems, Ekedal notes that forces entirely external to us can have a huge effect on our energy.

Experiments have shown that one person’s intention alone can have a measurable effect on another person.

Shana mentions one such experiment where two people were in two separate rooms, separated by a wall impervious to even any form of electromagnetic energy. Researchers could measure notable changes in one person’s energy field simply due to the intentions of the person in the other room.

Given this information the need to surround ourselves with positive people when healing from cancer kind of takes on a whole new meaning doesn’t it?

We also discussed the subject of an upcoming interview with Robyn Openshaw who has a book coming out on a similar concept but ties it in large part to the foods we eat. Foods have measurable energy fields as well, and if we are literally absorbing these foods to become part of us, it certainly would makes sense here as well to want to be consuming the more of the foods with the highest frequencies.

Long story short the high frequency foods tend to be fruits and vegetables. Go figure. Dr. Robert Morse stated a few interviews back as well that fruits have the highest electromagnetic energy out of any food group.

How Does Energy and Frequency Relate to Childhood Cancer?

We’ve always instinctively “kept our vibrations high” around Ryder, but it’s only lately having more conversations such as this one that I’ve began to really quantify the reason for it.

Shana notes that kids are the most sensitive to changes in energy as they haven’t been numbed to it over the years as we are. They “feel” everything.

Think about when you walk into a room when two people have just had a big fight. Even if their faces and actions don’t give it away, you can “feel” that they were just in a fight.

Shana notes that our kids can feel this energy too even if they can’t put words to it. When they can tell something is wrong yet mommy and daddy are telling them everything is OK, this is what begins to teach them to discount their own internal guidance system.

So with the understanding that energies can be influenced from another room, and knowing kids are likely more sensitive to energetic changes even than adults, just saving your fight til you get to the other room might not even be good enough. The two of you really need to come together, even in the most stressful of circumstances, for your kid.

And just to be sure this isn’t written from a “holier than thou” place, Teddy and I certainly aren’t perfect in this regard. But just acknowledging this kind of stuff goes a long ways towards solving the problem in light of what’s really important. And the more we think in these terms the better we get.

How We Can Start to Change Our Frequency Right Now

Shana notes that to really get down to the heart of some of these deeply held belief systems, working with someone (such as herself) is invaluable in that sometimes you need an outside perspective trained in what to look for. The hardest person to look objectively at is almost always ourselves.

That being said, on the emotional / belief system piece she suggests we look back at our lives in ten year increments and ask ourselves which moments made us the most happy, and which hurt us the most.

Shana says when we do this we can start to connect dots. Noticing people saying similar things at different parts of our lives, reinforcing belief systems and so on.

Also, meditation is of course what everyone thinks of first when it comes to this sort of work, but that is not without reason. She was nice enough to make this guided meditation for us which is a good place to start.

All that being said, the best point she made was simply that when you begin thinking in these terms and looking for things to uplift your frequency, you’ll find them. And they will likely be the right things for you at the right time.

In closing, as Shana Ekedal puts it, thinking in terms of energy and frequency is the only true holistic approach to health. If all we’re doing is thinking about nutrition and exercise, we’re missing a big piece of the puzzle.

Frequency alchemist and author, Shana Ekedal is a trailblazer in the area of mind, body, and spirit wellness. She has transformed the lives of women around the world including public figures by helping them to heal their bodies, effect positive change in their businesses and to have great impact and influence in the world. Shana is the host of Be Well Live, a show dedicated to empowering people to live authentically and The Soul Frequency Show podcast dedicated to helping people raise their vibrational frequency. Her guests include NYT bestselling authors, celebrities, and holistically minded visionaries.

Shana holds a Bachelor of Science in Interpersonal Communication and her formal training includes nutritional science, psychology, and energetic healing. She has been published in the Journal of Nonverbal Communication and is a featured contributor for Awareness Magazine. She was awarded the James I. Brown Award from the Institute for Study of Intrapersonal Processes. Her first book will be released to the public in 2018.

Listen to Episode 17 on Inexpensive & Effective Approaches to Cancer

Listen to Dr. Darrell Wolfe talk about the Frequency of Cancer