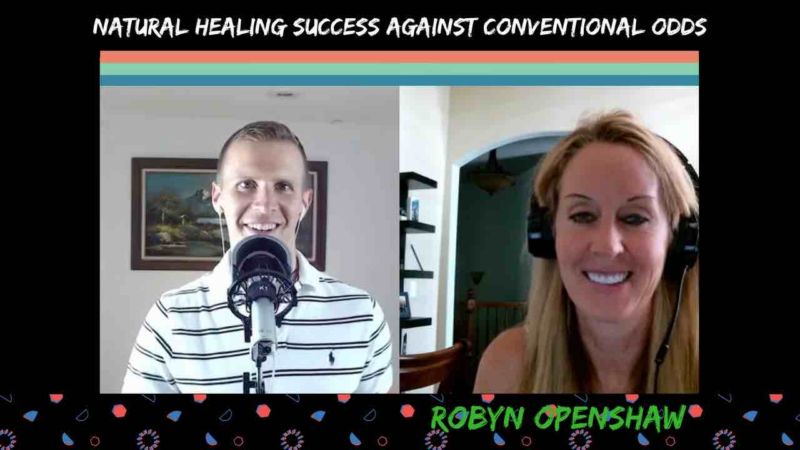 In This Episode & Article:

Highlights of the Robyn Openshaw Interview

No need for a “how this information applies to childhood cancer” section as there was a very significant mention of childhood cancer in this week’s interview with Robyn Openshaw.

In 2003 12 year old Parker Jensen’s pediatrician noticed a small growth beneath his tongue. A sample was sent to a lab and it came back as probable Ewing’s Sarcoma.

The state and hospital then demanded that Parker undergo chemotherapy immediately, barring Parker’s parents from getting a second opinion.

Upon learning of all the damaging effects the treatment would have on their son, and without confirmation their son actually even had cancer, Parker’s parents refused chemotherapy for their son. The issue quickly escalated to a very high profile court battle.

At some point along the way the family was in Idaho for a family reunion and Parker’s father was actually arrested for kidnapping his own son.

The matter ended up garnering so much public outrage that the case against the parents was eventually dropped. Thankfully so as it turned out that Parker Jensen did not in fact have cancer.

This is a classic “the parents know best” kind of story we love here. While we are certainly not “anti any form of conventional treatment whatsoever,” the family certainly needs a more active role in childhood cancer treatment decisions than it has had for quite some time now.

Each child needs to be treated individually. While we appreciate the research and data that goes into developing the “standard of care,” more emphasis needs to be placed on minimizing damage than what is practiced currently.

In our own story our son Ryder was halfway through the standard protocol for intermediate risk neuroblastoma when we moved and happened to land on a team that was happy with the astounding progress he’d already made and willing to take a “wait and see” approach. Ryder never received another drop of conventional cancer treatment.

A Tale of Two Prognoses

Robyn also talked about her own experience from her childhood dealing with cancer in her own family.

Robyn’s grandmother was diagnosed in the early 80’s with stage 3c metastatic melanoma, which had a very poor prognosis. Right around the same time her uncle was diagnosed with stage one Hodgkin’s Disease and was given a 95% chance of survival via conventional treatment.

Robyn’s grandmother went across the border to Mexico and underwent The Gerson Therapy along with eating apricot pits (which were completely banned from the US at the time) and various other alternative cancer treatment modalities.

Robyn’s uncle died 18 months after he was diagnosed, Robyn believes from the effects of the treatment. Her grandmother went on to live another 25 years.

The Vibration of Health and Cancer

Robyn’s new book, Vibe, is all about the frequencies we and everything around us are vibrating at and how this applies to us in an everyday sense concerning our health and happiness.

The main point of interest for the highlight article is the work of a researcher at Eastern Washington University who studied the vibrational rate (in hertz) of people at various states of health.

He found that a healthy human being vibrates at 62-68 Hz, that at below 62 Hz cells begin to mutate, those with Epstein Barr or candida infections vibrate at 55 Hz, and those with end stage cancer are vibrating as low as 25 Hz.

If this is true then clearly we should be putting a whole lot more thought into how to “raise our vibration” than we currently are.

Robyn notes that Einstein was quoted as saying “Everything in life is vibration,” and Nikola Tesla a short time later would posit that “If you want to know the secrets of the universe, think in terms of energy, frequency, or vibration.”

So this may indeed be something worth considering…

Listen to (Above) or Watch (Below) the Whole Robyn Openshaw Interview.

These are only snippets of the incredible stories Robyn had! In addition to much more detail on the Parker Jensen case, Robyn’s grandmother and uncle, and vibration Robyn talked about:

Her own story of healing reversing four autoimmune conditions, constant migraines, frequent mini-strokes, infertility and a questionable tumor under her arm.

Reversing life threatening asthma attacks, failure to thrive, and the need for antibiotics and liquid steroids in her son.

Robyn’s use of black salve in herself later in life to successfully treat skin cancer, and her research visiting nineteen alternative cancer clinics around the world.

Robyn Openshaw who is the author of fifteen books, including bestsellers The Green Smoothies Diet and Twelve Steps to Whole Foods. Her latest book, Vibe: Unlock the Energetic Frequencies of Limitless Health, Love & Success, will be released by Simon & Schuster in October 2017.

She is a former psychotherapist, university professor, and lectured in over four hundred fifty cities in the six years after launching her popular site GreenSmoothieGirl.com in two thousand seven. She’s a single mom to four children who are now flying the coop. She skis and plays tennis competitively in Utah, and believes that everything is possible if you leverage the highest frequencies in the Universe.