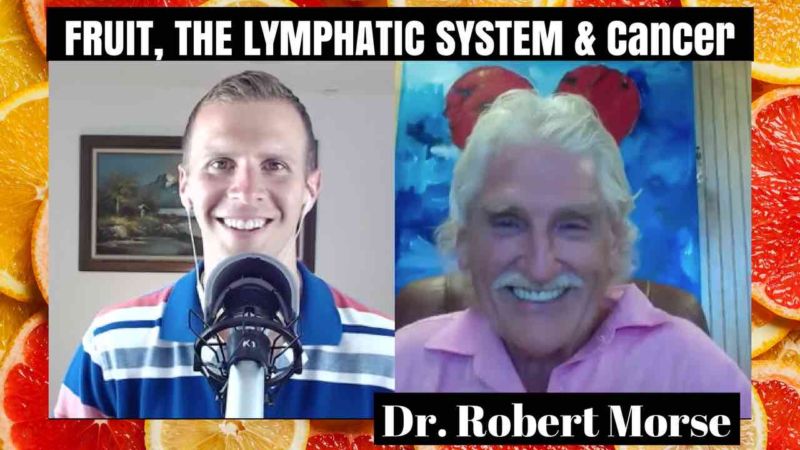 Dr. Robert Morse stops by to make us rethink everything we thought we knew about disease, and consider that health may just be much simpler than we’ve been making it out to be.

How the Lymphatic System Applies to Childhood Cancer

Dr. Robert Morse has been seeing patients for forty-five years. In that time, he has watched the age at which he sees cancer patients on a regular basis continue to drop. This of course is right along with cancer rates overall increasing.

The point here is that something is causing the increased cancer rate. In general, the common sentiment within the natural health community is that the increase is due to the rising levels of toxicity in every aspect of our daily lives.

While toxicity is undoubtedly a major contributor, Dr. Morse had an interesting take on childhood cancer that I’d never heard before.

As you’ll read below, one of Dr. Morse’s key concepts in knowing the true nature of cancer and all chronic disease is to understand the lymphatic system. The lymphatic system is basically the waste drainage system of the body.

Robert states several times during the interview that a child’s lymphatic system at birth is inherited from the mother.

If mom has a congested and sluggish lymphatic system during pregnancy it’s of course not good in general as there will be more unprocessed waste in the baby’s presence. In addition however, Dr. Morse is saying that the baby will actually inherit the state of the lymphatic system as they develop.

Dr. Morse says he sees the lymphatic system in children overall coming in worse and worse.

As he also mentions in the interview, one of the first things affected by a sluggish lymphatic system is the adrenal glands. On a personal note, various forms of analysis have consistently revealed weak adrenals in our son Ryder.

Dr. Robert Morse: The Lymphatic System Is Key to Cancer

As noted above, Dr. Morse puts a whole lot of emphasis in understanding the lymphatic system in the context of cancer and all chronic disease. Rightly so.

Robert states that a cancer cell is nothing but a damaged cell. The damage comes essentially from acids.

These acids can come in the form of environmental toxins, but also possibly even more consequential is the waste produced by our own metabolism if we are not properly disposing of it.

Dr. Morse invites us to imagine we’ve just gone poo-poo in the toilet and flushed.

Now for illustration’s sake picture you for some reason your septic tank has a glass top and you can see into it. You run out to the back yard expecting to see your waste come floating by, but instead all you see is the water from the flush…

Where did the poo go? It’s still in the house. Your pipes are clogged.

This is what it means to have an improperly functioning lymphatic system. In the course of everyday life our cells are continuously producing their own waste in the process of energy production. They’re burning fuel which is creating a byproduct just like when a car burns gas and exhaust comes out the exhaust pipe.

When our lymphatic system gets clogged up which is usually accompanied by our major organs of filtration (liver and kidneys) also being clogged up, our cells’ own acidic waste combined with the toxins associated with living in the modern world have nowhere to go and start wreaking havoc on our cells.

And… let’s also not forget that our lymphatic system is what transports cancer cells to the lymph nodes where macrophages are waiting to break them down.

So when our waste and cancer cell disposal system has failed, it’s not too much of a stretch to predict that the only logical outcome is indeed cancer.

Picture a snow globe. Shake the snow globe up. See all of the snow whirling around inside of the globe?

Now change the word “snow” to “sediment.” According to Dr. Morse a properly functioning bodily filtration system (liver, kidneys, and lymphatic system) should be producing this type of sediment every time we urinate.

How can you tell if your urine has this sediment in it? Make your own snow globe… pee in a jar and shake!

Little to no snow means you’ve got some work to do.

Fruit and Herbs to Move the Lymphatic System

Just as the explanation of cancer and most chronic disease is much simpler than we’ve been lead to believe according to Robert, so is the solution.

Dr. Morse firmly advocates that genesis of most of man’s health problems is that we’ve forgotten what our food is. Fruit.

Now we’re eating things we shouldn’t be. Acidic, dead and dormant food in the form of animal products and grains. That is where the problem starts according to Dr. Morse.

Dr. Morse states man and primates have the most energetic system of all animals which in turn needs the most energy to run. Fruit has the highest amount of electromagnetic energy of any food.

Interestingly, Dr. Morse states that cells will actually accept fructose (from fruits) before glucose, without the need for insulin to do it.

In addition to a high fruit diet, Dr. Morse uses various herbs combined into tinctures to help get the lymphatic system moving and detoxifying again.

I made sure to clarify in the interview if in his view it really is as simple as “fruit and herbs.” Dr. Morse answered in the affirmative.

Who knows, maybe it is.

Purely personal conjecture but if you’re religious and picture the Garden of Eden… well… fruit and herbs do come to mind fairly readily.

Doctor Robert Morse has been dedicated to truth and using Regenerative Detoxification to assist humans and animals back to health for over 40 years. Health becomes very simple when you understand how one loses it. Through his Herbal Health Club clinic and extremely popular YouTube channel Doctor Morse has spent decades assisting thousands in restoring and regenerating the tissues of their physical bodies as well as connecting them with God again.