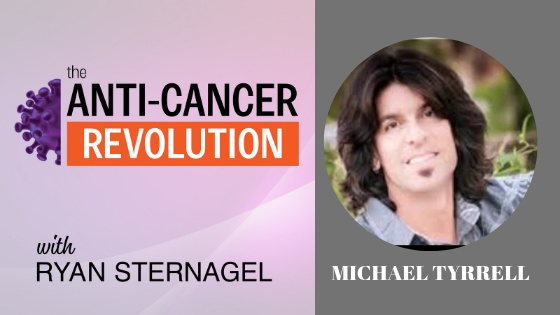 You are really going to like this episode all about vibration and the healing power of sound with Michael Tyrrell.

Michael is an author, visionary, musician, composer, and producer.

He exists to bring love, healing and motivation to a hurting world and in turn, inspire others in our generation to do the same.

Michael’s Wholetones 2 Sleep Player for deep healing sleep – Use code STERN for $10 off!!

Michael’s book The Sound of Healing

The Biology of Belief book by Bruce Lipton

The Magnasphere Michael used to instantly heal his laryngitis

Sonos speakers Michael recommends (but please don’t use the WiFi!!)

This topic definitely falls firmly into the energetic side of the healing spectrum.  If you are skeptical or doubtful of such things, I would refer you to everyone’s favorite Nikola Tesla quote, “If you want to find the secrets of the universe, think in terms of energy, frequency and vibration.”

The power of frequencies

In this episode, Ryan catches up with songwriter and producer Michael Tyrrell to discuss the healing power of frequencies and music, and why most music we listen to today is delivered at the wrong frequency.

Not all frequencies are healing

A musician all his life, Michael knew from an early age that there was something wrong with music. Frequencies are measured using unit of measurement called Hertz (Hz).

Michael wanted to know why tuners calibrated at a specific frequency (440 Hz). “Who says this is how you must tune your instrument?” Micheal discovered through traveling the world that not everyone tunes to the same note.

Micheal wanted to know where the standardized A=440 Hz frequency came from. What he discovered shocked him. This frequency has an attachment to Nazi Germany and mind control, and is a frequency that can disrupt the circadian rhythm of the human body.

Fate or God brought Michael to a coffee house in Tel Aviv, Israel where he met a pianist called David who told Michael that when he woke up that morning God had told him he was to give his life’s work away today.

David spent his life studying and decoding the ancient psalms of King David –  ancient Hebraic forms of music. He gave these manuscripts to Michael in a backpack. Michael got home and played some of the music but his guitar was still tuned to 440 Hz. He put the music in his study and forgot about it for two years.

Michael came home one day with the number 222 in his head. He reached for his Bible wondering what he’d find on page 222. Sure enough he found reference to Kind David. He instinctively knew to double the number 222. 444 is a derivative of A but 4 cents higher. Michael calibrated his guitar to 444 Hz, pulled out the manuscripts from David and started playing. His hairs stood on end – he could feel the music.

Michael explains that 444 Hz is a balanced frequency. Instruments become more stable and stay in tune longer at that frequency.

Michael has discovered 7 frequencies that have been used to heal and protect since ancient times. He has created a compilation of music using these healing frequencies called Wholetones®: The Healing Frequency Music Project.

The power of the spoken word

Ryan and Teddy have been working with an energy healer who told them that Ryder had “a summer heat” trapped inside his body. For the next two nights Ryder woke up drenched in sweat as the heat was worked out of him.

Ryan explains that ancient writers associated the constellation Cancer with ‘a summer heat’.

Michael explains that words in descriptive and energetic forms have the ability to bless or curse. Michael encourages people to speak life to each other. If we can get out of the ‘them versus us’ mentality we can change the world.

Michael reminds us about the law of vibration and that the beginning of the universe was spoken “Let there be light”. “Frequencies were introduced into the world by the mouth of God.”

The importance of higher vibration

Michael believes that cancer is a disease of the environment. “We are being bombarded by negative frequencies such as EMFs”. Michael focuses on creating energetic environments of peace and sleep, that are conducive to healing and help people to relax and smile. He wants to help people into a space of homeostasis and spontaneous healing.

Michal explains higher vibration is better than lower vibration. “Negative people are low vibration. When you’re a high performing person frequency wise you operate with a lot of love.”

Micheal recommends making sure the frequencies you use are congruent and balanced, can interact with each other and can elicit healing.

Other experts and resources

Michael believes frequencies can affect your body on a cellular level. Ryan references Biology of Belief by Dr Bruce Lipton which discusses how thoughts can change blood chemistry, epigenetics etc.

Michael talks about Nicola Tesla and his studies on frequency. He created the Pico-Tesla frequency. Tesla believed that by vibrating parts of the body with low amplitude frequency he could bring spontaneous healing.

Michael cites another example, Dr Jerry Jacobson and his Magnasphere, a frequency arch that works on Pico-Tesla frequencies. Michael explains that he healed himself of Laryngitis after 15-20 minutes in the Magnasphere.

Michael has written a book called The Sound of Healing to help people unlock their potential.

The best way to listen to frequencies

Ryan asks Michael the best way to listen to frequencies. Michael explains that the problem is truncation or compression. “When you digitize anything you’re converting wave form into numbers”. So the best way to experience frequencies is in analog. Michael records Wholetones in analog. However he goes on to say that MP3s are better than nothing. The Wholetones samples on Michael’s website are MP3s.

Ryan asks Michael about different instruments. Micheal explains the frequencies are all the same it’s just a different modality – humming, crystal bowls, Tibetan bowls etc. It doesn’t matter about the instrument – just as long as it’s a balanced, healing frequency.

“Why are people sleeping less?” Michael explains that EMFs, 5G, photonic energy and wifi are all disrupting our sleep. “If you’re not sleeping 6-8 hours a day your body cannot heal.”

Michael remembers the times he slept the most soundly was in his mothers arms. She sand him lullabies – the song, creating soothing vibrations.

Michael has created Wholetones Sleep, a collection of lullabies. A nurse once told Michael that Wholetones should be the soundtrack for the entry and exit of every human in the world it was that calming..

Michael has created a Wholetones player to deliver the music at maximum quality.

Michael tells the story of the Wholetones launch party where everyone fell asleep. The joke is that the song on the album Angels All Around Us is “the song no one’s ever heard the end of”.

But the medical community want scientific evidence so Michael conducted a clinical trial with control groups. The results were conclusive – trial participants that listened to Wholetones fell asleep faster, stayed asleep longer and woke up feeling more refreshed than those who didn’t.

Michael explains that for some people the effects of Wholetones work straight away while others need more repetition. Volume is also not important when working with frequency as long as it’s audible.

Ryan’s quote of the day, “Trust in God but row away from the rocks”.

Save $10 by using the promo code STERN