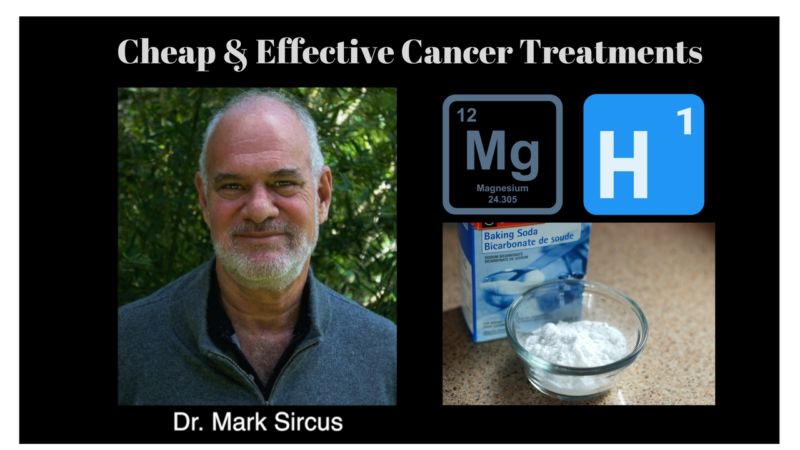 Dr. Mark Sircus explains how effective the most basic (and inexpensive) elements of life can be in high doses for cancer.

The main thing I want to point out here is what Dr. Sircus notes in his interview about his protocol in general. It’s all very easy. And that’s a very good thing when it comes to kids.

All of the elements mentioned below come in a liquid form or powder that is meant to be dissolved into liquid. None of them taste horrendous and can be easily hidden in other things if they’re not the best (or shot down a feeding tube for bonus points!).

Not only that, but the dosages of all of these elements are very small. Getting dozens of ounces of green and/or carrot juice into our kids is certainly ideal, but due to the turbulent nature of childhood cancer doesn’t always happen every day with the highest levels of determination.

Consistency is key in an integrative protocol so things that can be given in as little as a few teaspoons of water (hopefully it goes without saying to keep your kid as well hydrated as you can), or even drops in the case of iodine, are a big deal.

One item of note in regards to heat and choosing between an infrared sauna and a Biomat. The sauna is a surefire way to know your kid is actually going to get the benefit of the heat. You sit in there with them and that’s that. **Mention “The Stern Method” to the awesome folks at Sunlighten and they’ll hook you up with a $150 discount off any of their saunas.**

However, when Ryder’s had a Hickman line initially or when his port was permanently accessed, the sweat made the dealing with keeping the dressing dry a nightmare. Since you’re not enclosed with the Biomat you don’t sweat as much and as such it was much more conducive to those situations.

The Biomat during the day can be tricky as it’s hard to talk a kid into laying on one certain thing for hours at a time. Our Biomat mini does fit quite nicely inside the crib however and doesn’t leave any room to roll off either side so we have been able to get Ryder to sleep through the night on it fairly well.

Dr. Sircus’ core “natural allopathic” protocol is based off of emergency room medicine. What they use when none of the drugs will work that is.

Mark states that if someone winds up in the ER for a heart attack and they’ve exhausted all options, if that person is lucky, the ER docs will inject magnesium and give them a dramatically higher chance of surviving.

Dr. Sircus makes a very similar point to a core message that we try to emphasize here at The Stern Method. Cancer, like most chronic disease, can be described in a very real sense as a lack of health. The cure for a lack of health therefore… is health.

Mark notes that magnesium is involved in practically every function of the body. It can be thought of as oil in a car.

So again, if you’re looking to replace lack of health with health, having plenty of magnesium in the body to make sure your engine is running clean sure sounds like a good idea.

How to Get More Magnesium in the Body

Dr. Sircus mentioned several great options for getting more magnesium into the body.

Transdermal (through the skin) application is very effective. As such, Dr. Sircus mentioned a magnesium massage using magnesium oil as a great way to both get more magnesium into the body and relieve stress at the same time.

Dr. Sircus also has people taking two products orally that have a good deal of magnesium in them as well.

Mark notes that with baking soda, you want the bicarbonate part not necessarily the sodium. So the pH adjust product is made with magnesium and potassium and just a small amount of sodium.

Mark says he originally took an interest in sodium bicarbonate when he learned that it was in army manuals for clearing kidneys of uranium toxicity.

Dr. Sircus states that bicarbonate is the safest and most powerful way to alkalize the body in existence. It’s certainly a lot less expensive than an alkaline water ionizer!!

Back to emergency room medicine, when a patient becomes acidic and all else fails they pull out the baking soda.

A couple interesting points Mark made about alkalinity.

Dr. Sircus stated that a primary cause of thyroid, breast, prostate and ovarian cancer is an iodine deficiency. These organs concentrate iodine, and iodine is good for killing off just about every harmful organism one would not want in their body.

Back to the emergency room, in the case of a patient with an antibiotic infection, they’ll surely be getting iodine.

When we don’t get enough iodine, these organs will start pulling in everything they think are iodine. Fluoride and bromide, two toxic substances that should never be ingested but somehow got confused as water and baking additives are two of these compounds.

Radioactive iodine isotopes are also part of the radioactive milieu we are exposed to at ever increasing levels from power plants and so on. When our bodies do not have enough healthy iodine we will also absorb more of the radioactive form. Not a good thing.

So with all of that said about the importance of iodine, Dr. Sircus notes that Dr. David Brownstein has been tested thousands of patients that come into his clinic for iodine and has found 96% of the population to be deficient!

How to Get More Oxygen and Hydrogen into the Body

The benefits of oxygen for a cancer patient are well known so we won’t belabor them here.

Dr. Sircus did note a few things on getting more into the body I wanted to make sure to repeat.

Dr. Sircus also noted the importance of hydrogen. It’s one of the smallest molecules around and as such is involved in practically every bodily function and goes everywhere in the bod. While molecular hydrogen is usually associated with water ionizers, Dr. Sircus prefers tablets one can drop right into their water.

Lastly Dr. Sircus noted the connection between heat and the immune system. Mark states that body temperature is directly tied to immune activity.

Using the assistance of an infrared mattress or sauna we can create an artificial fever to put the immune system into overdrive!

This of course is in addition to the incredible detoxification (the importance of which cannot be overstressed) benefits that come with either the sauna or the Biomat as well.

Dr. Mark Sircus, Ac., OMD, DM (P) (acupuncturist, doctor of oriental and pastoral medicine) is a prolific writer and author of some astounding medical and health-related books. Dr. Sircus’s methods are based on medical science and long years of clinical experience, not only his own but experiences of doctors from around the world who have been practicing brilliant medicine.

His books are heavily referenced, but the layperson finds little difficulty in understanding his presentation of medical topics. For many years Dr. Sircus has been researching into the human condition and into the causes of disease; he has distilled many of the divergent medical systems into a new form of medicine that he has coined Natural Allopathic Medicine.