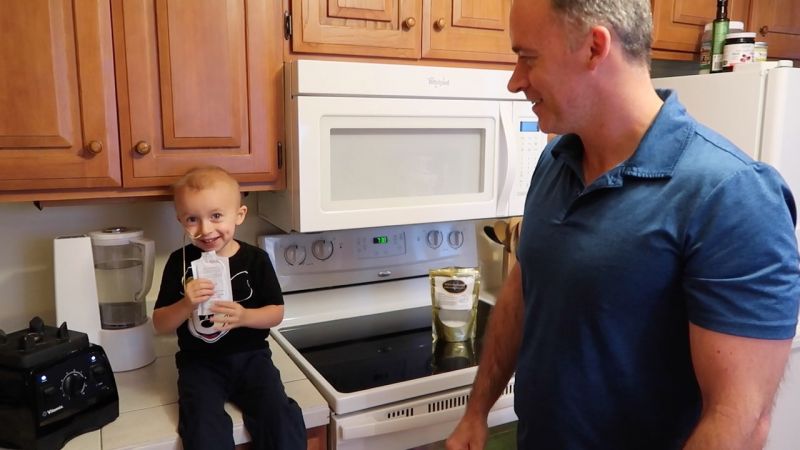 We’re not the only ones!! While attending the Oncology Association of Naturopathic Physicians Conference in Arizona over the weekend I had the pleasure of going with and staying in the home of Scott Chaverri, his wife Kayleigh and son Matthew. To say the least, it was a real treat getting to see firsthand a family “getting after it” with the same type of vigor towards the natural and integrative approaches to childhood cancer that we’ve tried our best to maintain throughout this journey.

Matt was officially diagnosed with Stage 3 Embryonal Rhabdomyosarcoma of the bile duct and liver in May of 2016, about 2 weeks after his 2nd birthday. The little guy has been through a lot! He went through 15 weeks of chemotherapy (Vincristine, Dactinomycin, and Cyclophosphamide alternating with Vincristine and Irinotecan) which came with some particularly nasty side effects, followed by a surgery remover 85% of his liver, successfully removing the tumor, followed by more chemotherapy a month after the surgery to let his liver regenerate. Did I mention he lost the ability to walk from all of this for the first six months after diagnosis? It’s a good thing kids tend to heal, and forget, a lot faster than adults…

In February of 2017 his scans showed no evidence of disease!! As I write this (also in Februaury 2017) Matt has four more cycles of chemo left and until he’s home free! From conventional treatment that is… I have a pretty good feeling that a well-researched anticancer lifestyle and integrative regimen is here to stay for Matthew just as it is for Ryder.

Like us, Scott and Kayleigh were already very much into natural health and supplementation as a way of life and immediately hit the books, and the internet, and the naturopath’s office as soon as they found out something was wrong. Ever since, the two of them have been continuing to fine tune their integrative approach to  not only make sure they’re helping Matt heal from the cancer on all fronts but also protect his body as much as possible from damaging effects of conventional treatment and mitigating the side effects.

How Scott Researches Integrative Treatments for Matt’s Healing and Protection

Scott exemplifies the term “dadcologist” (although maybe I would tweak it a bit to “naturopathic dadcologist”) and shows just how many integrative therapies a parent can do outside of what is provided in the hospital to help their kid beat cancer. It’s a labor of love without end. Scott and I may have been the only two people attending the conference without an N.D. or M.D. at the end of their nametag and our children (and all of yours as we turn the information we gathered into articles and videos) will directly benefit. Like me, Scott lives on PubMed and has been pouring through studies along with consulting with a variety of professionals to come up with the best possible protocol for Matt. Unlike me, he’s been much more meticulously organized in his research and the spreadsheets he’s created documenting everything he’s found in a way that’s easy to come back to are incredibly impressive.

The main point Scott is quick to bring up is that customizing a protocol specific to someone’s exact situation is something ANYONE can do. Even a layman can start reading up on the specific genetic pathways, enzymes, growth factors and so on that have been shown to be associated with a particular type of cancer. You don’t have to know exactly what it means, just that the research shows there’s either too much or too little of it in the cancer and that correcting it would be a good thing. Find some studies on the COX-1 enzyme being overexpressed relating to your child’s cancer? Start searching for “natural COX-1 inhibitors.” Too much TGF-Beta causing problems? You guessed it: “natural TGF-Beta inhibitors.” Often you can even just ask the doctor exactly what each chemotherapy or other drug they’re prescribing or clinical trial they’re recommending is trying to accomplish and if they know what they’re talking about you’ll get these keywords out of them that you can then go find the natural analog for. Take a look at our article on bee propolis for all of the connections I was able to make to neuroblastoma and other cancers along these lines for example.

Same idea with chemotherapy side effects. There is an enormous amount of research on all sorts of specific natural agents helping specific side effects from specific chemotherapies out there for anyone to find and this is where Scott has spent a LOT of time. When Mathew was having severe problems from several of the chemotherapy drugs he was receiving, uncommon problems that Scott had to request the drug insert and dig way into the back of it to find that this problem has been associated with this chemo that not even the oncologists were always aware of. These side effects included pain in hands in feet, muscle weakness (to say the least, he was unable to walk!), ptosis, lazy / wandering eyes and even delayed gastric emptying due to vagus nerve damage. When no doctors on either the conventional or natural side had complete answers for him Scott knew it was up to him to fix the problem. “No one’s going to do it for you” has been a catch phrase Teddy and I have come back to over and over again throughout this journey and Scott was well aware of this himself.

Some of the journal directories I like to use that I know Scott spends a lot of time on as well for this type of research are: Directory of Open Access Journals, PubMed, Google Scholar, ScienceDirect, Wiley Online Library, and ClinicalTrials.gov. Again, even if you’ve never done this type of research before, spend enough time on these sites just searching your specific cancer and chemotherapies of interest in combination with various foods, supplements, and alternative therapies and you’ll be amazed at the connections you’re able to make for yourself.

Both Parents on Board With Integrative Therapies

Today thanks to Scott’s integrative cancer research all of the problems associated with the chemo Mathew was experiencing have been more or less resolved. While it’s still chemotherapy which is of course not something you WANT going into your child, Matthew is certainly a lot better off day to day now that Scott has done this research AND that he and Kayleigh acted on it. It’s easy read something you think might help, but just reading about it doesn’t get you very far, you need to act on it and in the case of childhood cancer both parents really need to be on board. While Scott and I were at the conference Kayleigh was making sure Matt got everything he needed and every day when we got home she rattled off the checklist of everything he had gotten. As you can see in this video, they’ve certainly got their routine down.

On the note of both parents being on board, two minds working towards a common goal are always better than one. In addition to all of the nutritional research, Kayleigh has also been learning a form of energy healing which I hadn’t heard of yet called Pranic Healing to help Matthew. I’m always fascinated by energy medicine devices and the person to person energy healing is something I’ve been meaning to look into further for myself, but since there isn’t as much published literature out there on things like this it’s not quite as high on Scott’s radar because as we all know that have seriously tried to dive into things of this nature it’s just not quite as researchable in the traditional sense. Bottom line is since both parents are looking into the things they are naturally drawn to, Matt benefits by getting healing from a wide variety of both physical and energetic / spiritual sources.

A New Writer for My Kid Cures Cancer!

Speaking of different minds working towards a common goal, I’m very excited to say that you can look forward to seeing articles written by Scott on the site in addition to mine! Since our time window going through chemotherapy with Ryder was relatively short, my research into mitigation never developed as much as it has in other areas. Scott on the other hand has been diving deep into the chemoprotective side of things for quite a while now and as I mentioned, the body of research he’s managed to collect is quite impressive. And while this has been on my list to get back into for a long time, the reality is with a full time job, continuing to research what’s best for Ryder, making sure we nail his schedule every day and so on, having Scott share what he’s already learned is going to result in a lot better information in a lot shorter of a timespan than coming from me. He actually just wrapped up a draft of an article on preventing and reversing peripheral neuropathy and other side effects from Vincristine (one of the most commonly prescribed chemotherapies for childhood cancers)! Coming soon, be on the lookout. ☺

To wrap it up, the Chaverri family is the perfect example of the message we’ve been trying to spread in childhood or even adult cancer for that matter. No one cares about you or your child making it through cancer more than you do. That statement applies both to the conventional and natural sides of oncology. No one knows your situation better than you do. I’m not saying it’s not a good idea to consult with professionals, we all stand on the shoulders of others, but at the end of the day you’re the only one that knows exactly what’s working and what needs more work. And sometimes, the best person to do that work is you.