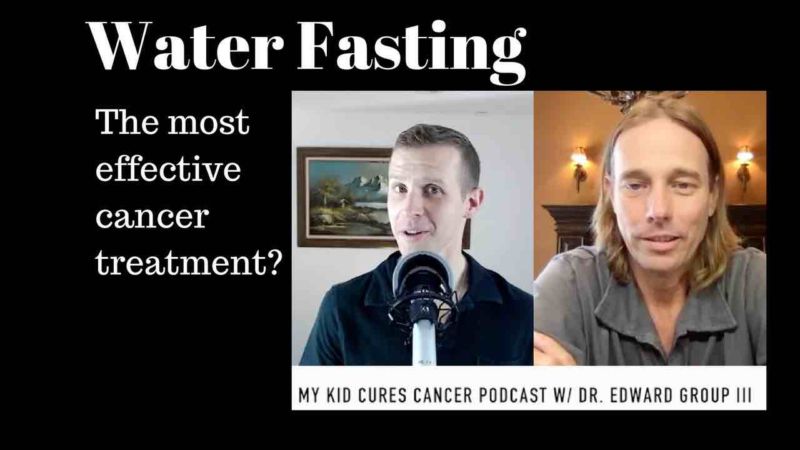 Dr. Edward Group III asks in the midst of the quest for the perfect diet, perfect supplements and perfect treatments for cancer, and even the quest to find the root cause for that matter… what if we just drank water and nothing else? Turns out quite a lot!

This is a question I could see many not wanting to touch but Dr. Ed Group dove right into it which I really appreciated.

Below you’ll learn of the many anticancer and preventative health benefits of fasting but with something like this the first question that always comes to my mind is “can I apply this to my kids?”

Dr. Group says that there are many case reports of children fasting. In every instance nothing negative physiologically was reported. The children mainly just realized the health benefit that was hoped for.

Ed also notes that when a child is sick, they will naturally fast. The same observation has been made regarding animals. They instinctively know that their bodies should be focused on healing, not digesting.

Somewhere along the way however we become convinced that you must force food into yourself or your child when there is sickness. We must do what we can to reverse that programming.

Dr. Group says that he has not found any evidence that a three day fast would be harmful to a child. He says he would certainly do so for his own kids if he felt it was necessary, and that his two kids do indeed do one day fasts regularly as it is. They are nine and eleven years old.

Ed notes that he likely would not fast a child longer than six days. In the case of cancer, he would likely be rotating them (or adults for that matter from what I could tell) from around six days of fasting, six days of a plant based ketosis(ish) diet, and six days of a more standard plant based diet.

Personally I’d likely be throwing some number sevens in there as all sixes would make me pretty uncomfortable! ☺

Dr. Ed Group came on the show and did this interview not long after completing his own water-only fast of eighteen days.

Nothing whatsoever aside from water entered his stomach for eighteen days.

Ed said during that time he literally did not have a grain of salt, and only brushed his teeth every few days and spit out the toothpaste before it had time to absorb into his mouth.

Dr. Group noted that fasting has been around for thousands of years and he wanted to document for everyone himself just how safe and effective this process really is.

Especially in a time with so much information and argument floating around on the best way to approach cancer and health in general, Dr. Group wanted to remind everyone of the concept of simplicity.

Even after eighteen days without eating, Dr. Group only lost four ounces of muscle throughout his entire body.

The body can do amazing things simply with water, rest, sunlight, and fasting.

What Happens during a Water-Only Fast?

Dr. Group notes that there are other types of fasts out there – juice fasts, bone broth fasts, etc.

For the purposes of this discussion though, we are talking about consuming no nutrient whatsoever outside of water for a period of one or more days.

In this case the digestive system will shut down entirely.

Even in normal weight individuals, there are tens of thousands of available calories in stored body fat. When we fast we access those calories. This is the reason we are able (and I would say designed) to go long periods of time without eating.

The Anti-Cancer Health Benefits of Fasting

Dr. Group noted quite a few benefits of water only fasting that really do make a whole lot of sense. Once you really wrap your mind around these concepts it really starts to seem quite like common sense that this would be something one would want to do periodically with or without a cancer diagnosis.

The Body Directs Its Full Energy toward Healing

Dr. Group notes that ONE standard American diet meal can take 90% of the body’s energy for three days to digest.

Even with healthy eating habits, there is still a significant amount of energy that gets wrapped up in the digestion process. Especially when we are taking in food morning to night.

When we throw in the stress and negativity that is built into modern day life the body has to deal with on top of all if this digestion, it simply does not have the time or bandwidth to focus on healing itself.

When we remove digestion from the equation altogether however, the body is then free to focus entirely on what needs to be repaired.

In other words, the body begins to literally rebuild its immune system.

When I hear statements all the time such as “you can’t have cancer without a damaged immune system” or “cancer cannot exist in an intact immune system,” my ears certainly perk up when I hear something about how to rebuild an immune system.

This is also something very important to note for those that have gone through chemotherapy. If the body’s immune system gets wiped out even further from the effects of chemo we want to be doing everything we can to build it back up.

Dr. Group says he knows of no supplement or therapy which will cause the body to produce new immune stem cells after just three days. Not even close.

At day five or six, Dr. Group notes that the body will then go into autophagy.

Autophagy is where the body scavenges itself for any damaged or diseased tissue and breaks it down to be used for parts elsewhere or discarded altogether.

This process applies down to the cellular level. Even down to the mitochondria and organelles within a cell.

So again, when I hear things about cancer being caused by damaged mitochondria, my ears certainly also perk up to ways of getting rid of defective mitochondria.

In an incredible case report, Dr. Group noted a woman with Lymphoma undergoing a 21 (he said 14 in the interview but I believe he’s referring to this report) day water-only fast.

The woman was on close supervision and at the end of the 21 days her lymph nodes were dramatically reduced in size. She then continued on with a minimally processed plant based diet.

In six and nine month follow up visits “the patient’s lymph nodes were non-palpable and she remained asymptomatic.”

Dr. Group notes another case report he found of an unhealthy man undergoing a fourteen day water-only fast. When he was examined after the fast doctors proclaimed he had the body of a 17 – 20 year old.

Doctor Edward F. Group the third founded Global Healing Center in 1998 with the goal of providing the highest quality natural health information and products. He is world-renowned for his research on the root cause of disease. Under his leadership, Global Healing Center earned recognition as one of the largest natural and organic health resources in the world. Dr. Group is a veteran of the United States Army and has attended both Harvard and MIT business schools. He is a best-selling author and a frequent guest on radio and television programs, documentary films, and in major publications.

Dr. Group centers his philosophy around the understanding that the root cause of disease stems from the accumulation of toxins in the body and is exacerbated by daily exposure to a toxic living environment. He believes it is his personal mission to teach and promote philosophies that produce good health, a clean environment, and positive thinking. This, he believes, can restore happiness and love to the world.

Yes, EMOTIONS Can Cause Disease. Here’s How to Address It: Dr. Meg Haworth

The Link between EMFs and Cancer, What you NEED to know: Nicolas Pineault

Preventing Side Effects from ALL Treatment with Hyperbaric Oxygen, Sauna and Supplementation

How to Unleash the Power to Heal From Within: Razi Berry

The Science behind the Gerson Diet: Dr. Patrick Vickers

Layman’s Guide to the Metabolic Theory of Cancer: Travis Christofferson

Find Cancer before Your Doctor Can… And after He Says It’s Gone: Jenny Hrbacek, RN

Cancer as a Metabolic Disease – What You Need to Know: Professor Thomas Seyfried